Although I’m about 17 years late to the party, I watched Shawshank Redemption for the first time last night. I won’t ruin anything for those of you who have never seen it (I think the spoiler-alert clause runs out after a decade, but just to be safe), it’s definitely a tearjerker. But inside all of the tales and the continuous melodic sounds of Morgan Freeman’s endless narration, I realized just how smart old men in TV/movies where the star is the prison or jail where they reside. 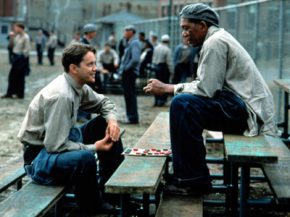 These men are usually the guilty ones who learned a bit on the outside and hardened that knowledge as they did time. And when they speak, I listen. I love good TV/movie quotes, especially when they come from slightly tortured characters. And I love smart older men, especially when they’ve been stuck in jail for 20+ years and had time to hone their “seen it all, the grey in my hair should let you know how much smarter than you I am” style.  These are my favorites; you might even consider them words to live by if you’re into living your life based on quotations from fictional characters (no judgment).

“Let me tell you something my friend. Hope is a dangerous thing. Hope can drive a man insane.” – via Red in Shawshank Redemption

“Just ’cause I talk to God doesn’t mean I’m crazy.” –via Bob Rebadow in Oz

“Hey, ain’t nothin’ wrong with a man cryin’ every now and again.” –via Willie Long in Life

“Some men are born leaders, others are not. A wise man knows his own limitations, you think on that!” -via Burr Redding (we met his character when he was just starting out his life sentence, but he still meets my old man requirement, bonus points for odd facial feautures) in Oz