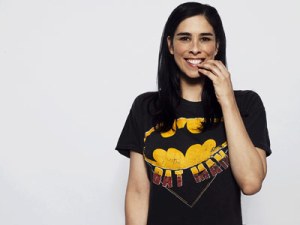 Everyone’s favorite controversial comedienne, Sarah Silverman, is coming back to TV- this time on NBC. Jesus IS Magic! I’m not sure what material she is going to be limited to on network television though…sad face. Even though I wasn’t the biggest fan of “The Sarah Silverman Program” (Comedy Central) I will forever be in awe of her quick wit, superior sarcasm skills and unflinching ability to say what people think about but are too scared to say because of the potential backlash.

“NBC is the hunt for a new female-driven Seinfeld-like comedy, enlisting comedians Whitney Cummings and Chelsea Handler for projects, and now Silverman.”

2 thoughts on “a silver(man) lining”