Young Moira is doing her usual maid duties when the man of the house propositions her. Although their conversation makes it clear they’ve been intimate before, Young Moira has no interest in a repeat performance. The husband isn’t familiar with ‘no means no’ and during the struggle, neither party hears that the wife is slowly approaching…clutching a gun. The wife enters the room and we see that it’s a young Constance (compliments of Benjamin Button CGI). She shoots Moira in the eye and then kills her husband. But somehow Moira survived… 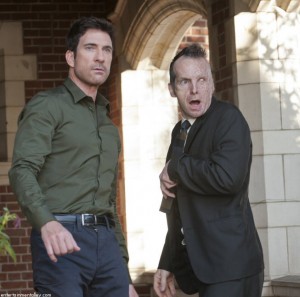 In one of the show’s more seamless transitions we’re ‘back’ in the same room, except Ben and Vivien are having the argument. Although it initially sounds like they’re arguing about the Hayden situation, we learn that he’s been hiding another lie: they’re relatively broke. Vivien tells Ben that if she finds out he’s lied about anything else, they’re done. Oh Vivien, you have no idea!

She’s not anxious; she’s angry and ready to get the hell out of that house. A quick call to the realtor reveals what we all knew…the house isn’t exactly a hot commodity in the housing market. After a few threatening words exchanged between Vivien and the realtor, as well as a shot at Obama, it’s agreed that they’ll try to sell the house. Very, very unlikely.

Elsewhere in the house, Moira catches Constance stealing the silver. The venom between the two makes a little more sense now that we know Moira had an affair with Constance’s husband, perhaps the only man she ever really loved. Just when one part of their dynamic is explained, we’re left to figure out why neither can move on and how they became stuck.

“I just get the stains, do you want to make a new one?”

Ben has a new patient, Sally Freeman (Adina Porter aka Tara’s mom on TrueBlood). Her husband is ending their 23-year marriage because she’s boring. Knowing football is a great way to make your man happy, but not so much when you’re only able to blandly recite team names. During their conversation Ben blacks out and wakes up in his yard, with blood on his hands.

Young Moira is cleaning up the bloody mess and does her usual flirting with Ben, except things get a little more physical than flirty and Vivien catches them. FINALLY Ben tells Vivien that Moria has been coming on to him. During Moira’s outburst she notes that Ben (and men in general) see her as they want to see her, while women see who she is inside. The conversation ends with Vivien telling Ben he’s paranoid, crazy and guilty, all of which are caused by his indiscretion with Hayden.

“And the next stop on our tour of departed souls…murder house.”

Violet seems apathetic to last week’s home invasion when Ben interrupts her smoke break. Once he leaves, we see that Tate was also there and judging from his appreciation for how good a dad Ben is, it seems his father wasn’t as caring. Of course with Tate you spend more time reading what he doesn’t say than the few things he does.

Hayden pops up and lets Ben know that she didn’t have the abortion and that she matters, as well as demanding he meet her at 3. Ben shoos her out of the house and we can practically hear his heart pounding with anxiety. He gets more on his plate when a detective comes to the house and tells Ben that Sally is missing. Interestingly enough, the detective seems more concerned with looking at Young Moira than finding ol’ boring Sally.

“You were cruising me, I thought you were fair game.”

Vivien decides to take the LA murder tour and in addition to the arbitrary (???) murder of a seemingly gay actor, she learns more about the history of the home. In 1922, Charles and Nora Montgomery were a “happy” married couple.

Charles was a surgeon who developed a Frankenstein complex and drug addiction. During his downward spiral the bill collectors hovered around their home and his not-at-all supportive wife has Charles do surgeries/abortions for money. Very shifty and although their reign lasted about four years, their story did not have a happy ending.

Vivien begins bleeding after hearing the story, but her doctor assures her that “a little discharge is perfectly normal” and advises her not to move, since it will only cause additional stress. Ben is briefly haunted by his sexual demons and faints. Ben recovers and goes for his usual jog, which includes his usual harassment from Denis, who asks for a $1000 for headshots because he wants to act. 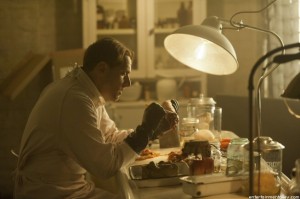 “Who you trying to protect doc?”

Ben, again, wakes up in his backyard, but this time he has a shovel. Constance warns him that the soil he’s digging is toxic and she suggests he just build over the whole thing.

Nora rings the doorbell and Vivien was understandably cautious from last week’s invasion but cares more about showing off the house to a potential buyer. Nora notes that she also had a child and we see a huge hole in the back of her head just before she vanishes.

The detective returns and tells Ben that they found Shelly. She was in the hospital after a suicide attempt, which was foreshadowed by the recorded conversation Ben tried to cover up. The detective tells Ben “it’s not a crime to be an asshole,” but Ben realizes he’s being drugged.

Hayden returns and similar to Vivien, she’s preggo and angry. After forcing a kiss that Ben ahs the decency not to enjoy, they head out the door to go someplace to discuss their situation. As they step out the door, Denis hits Hayden, killing her.

Hayden’s body is buried, right next to another body and the hole is sealed when Ben builds a gazebo. The way Moira and Constance react definitely means they know the owner of that body and probably means the body is Moira, who is now trapped forever.

The episode ends with Nora sitting in bed with Vivien and Ben…WTH.

The episode basically confirms that Denis, Constance and Moira are connected. However, now that we know about Nora, a whole slew of questions are introduced. Is she also connected? Does this mean that anyone who dies in the house is tied there forever? Are these “people” related or just bonded by the house?

Hayden may be out of the picture physically, but why did Denis insist that it was better he was the one who killed her and not Ben? Would Violet really run away? And did Tate give her that idea or is she just being a rebellious teenager? Speaking of Tate, why was he at the window and why did he ignore Constance when she waved at him?

After this episode, I’m officially invested in American Horror Story. I like that we’re seeing more of the ‘story’ element, with less emphasis placed on the ‘horror’. This will probably all change with the first part of next week’s Halloween episode. At this point overall opinions on this show have been very mixed, I predict that this was the episode that either confirmed those that will keep tuning in and ending things for viewers that were on the fence.