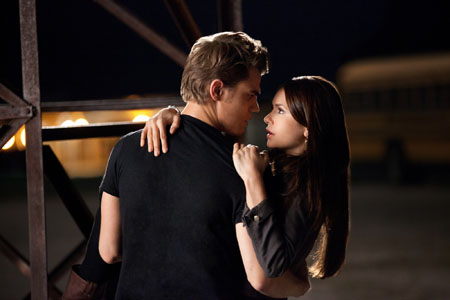 Stefan is frighteningly good at pretending not to care for Elena. Or is he not pretending anymore?

A number of cat-and-mouse games play out on the latest episode of The Vampire Diaries “Smells Like Teen Spirit” but it’s hard to tell who are the cats and who are the mice. Stefan and Rebecca, left behind by Klaus to watch over Elena and Tyler, respectively, are making nuisances of themselves in the lives of our Mystic Falls gang. Stefan bullies the students at the school track and Rebecca makes moves to take over Caroline’s place as the resident golden girl, perhaps even in Tyler’s heart. Alaric gives Elena self-defense classes to toughen her up. Spooked by Stefan’s coldness – he compels young women into playing a twisted round of Twister while he feeds on them – Elena concocts a plot to put him out of commission. Unfortunately, she’s not the only one plotting in Mystic Falls. Vicki convinces Matt to perform a ritual that brings her over to the world of the living. The catch is that she is on orders from the Original Witch to kill Elena so that Klaus can’t make any more hybrids. When Matt tries to stop Vicki from carrying out the witch’s orders, she clocks him with a wrench. She intends to stay among the living at any cost! Anna warns Jeremy that Vicki is up to no good but a jealous Bonnie turns to Matt to find a way to zap Vicki back to the land of the dead and lonely. Vicki stalks Elena at a bonfire where Elena is setting a trap for Stefan. Damon arouses Elena’s jealousy by flirting with Rebecca, who sees right through the ruse. Elena succeeds in luring Stefan into the path of Alaric’s crossbow filled with vervane-tipped darts. Just when they pack his unconscious body into Ric’s truck, however, Vicki traps Elena inside and sets it ablaze. Bonnie once again comes to the rescue and casts a spell that whisks Vicki to the site where she and Matt banish her back to the land of the dead. Despite his fear of being alone, Matt won’t allow his sister to hurt others. Judging from the growing online chatter about a possible hookup between him and Bonnie, I suspect he may not have to deal with loneliness much longer.  Jeremy, meanwhile, is growing closer to Anna, with whom he manages to connect physically after sharing that they can’t stop thinking about each other. Is this the beginning of the end for Jeremy and Bonnie?

Tyler and Caroline make up after having an argument over his new allegiance to Klaus. He’s been sired by the Original Vampire and is having trouble resisting his new urges, especially the young woman Rebecca serves up as his first human feeding. Damon gently tends to Elena’s bruises, his face temptingly close to hers as he assures her this flirtation with Rebecca was just an act. It’s obvious his display with the bloodsucking blonde got under Elena’s skin and it’s just as evident that he’s thrilled by this realization. Team Damon scores! The same can’t be said for Stefan, who cruelly taunts Elena for holding out hope that he will return to the side of the good guys. Exercising her new-found girl power, Elena stabs him in the gut as payback! Katherine, who’s been trying to rouse Michael the undead vampire hunter with human blood, gets a surprise of her own when she discovers that he prefers the blood of his own kind as he abruptly pulls her close to feed on her! Just as I thought I couldn’t be more shocked, Damon is attacked by a resurrected – and thirsting for revenge — Mason Lockwood!  Has Klaus succeeded in creating another hybrid?

One thought on “the vampire diaries recapping: smells like teen spirit”