How fitting that one of the scariest shows on TV would have a two-part Halloween special. Last week’s episode would have worked great all on its own, but knowing that there’s a potential pay-off for all those loose ends being tied up in Halloween (Part Two) makes all the little tricks and treats that much sweeter. If you didn’t already know American Horror Story has been renewed for a second season so maybe this will be a new Halloween tradition. 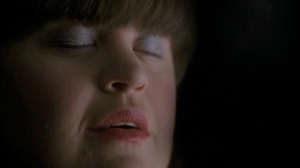 Before we jump into last night’s episode, here are a few stray observations from Halloween (Part One):

And now on to ‘Halloween (Part Two)’:

“I painted it black, I know how much you don’t like normal things.”

Larry has finally shed the nice guy act and we pick up where we left off last week, with him insistently banging on the door. Violet is obviously shaken, even without seeing the figure behind her and the hand that reaches out from under her bed. Tate summons her to the basement and gives her a black rose to begin their evening together. Ben and Vivien come home to find Violet gone, all the while still in full fight mode. If Ben wasn’t close enough to the edge, Hayden comes to the door. I’m not sure why this doesn’t freak Ben out more since he saw her being buried, but I’ve given up on these people using their best deductive reasoning skills.

“I won’t be the victim of your extortion!”

Ben (finally) snaps and beats the crap out of Larry, who continues to taunt him even with a bloodied and battered face. Larry begs Ben to kills him and lets him know that Hayden (along with all of the other dead) has nothing to lose. At this point I was wondering if Larry was speaking for the dead or if he was part of that group. While all of this is happening, the security patrol officer (Morris Chestnut) that originally helped installed the security system came to the house because the alarm was going off. I always assumed they send the cops, but maybe this a hands-on security company. 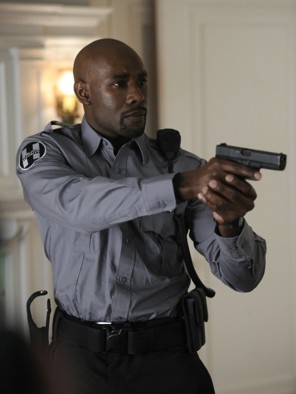 “Nice costumes. Who are you, the dead Breakfast Club?”

In the throes of their hardcore make out session, Tate is the one to abruptly stop, which makes Violet immediately question his sexuality. Of course he couldn’t have just been being a gentleman since Violet is a virgin, he has to be homosexual for not wanting to make love to her on the beach. But actually, it’s neither of those things. Tate tells her the meds that he’s on make him…less than ready. He tells Violet about his disdain for high school and as he’s doing an angst-riddled monologue, the couple is joined by a group of dead (or undead teenagers). They seem to know Tate and mention the house, his mommy and the fact that he’s been hiding for years. They taunt him, but never actually touch him like they so obviously want to.

Hayden calls Vivien and repeatedly tells her to ask Ben about Boston. When Vivien sees the message on the fogged mirror (such a wonderful horror movie cliché), she tells Ben that Hayden is in the house. He tells her they can’t call the police because it will draw unwanted attention to the murder house (oh, now that’s a concern). Ben travels down to the basement to look for Hayden (again with the basement!) and while she rots right in front of him, he’s clocked over the head with Larry’s handy shovel. Perhaps Vivien can’t hear any of this because Chad is destroying all of the Halloween decorations in front of the house.

“I love what you’ve done with the kitchen.”

Poor preggo Vivien can’t go back to her relaxing bathtub because it’s occupied by Hayden, who pulls a move straight out of the stalker handbook and seemingly kills the puppy we all forgot about. At some point, Tate and Violet came back to the house and made it up to her room without crossing paths with any of the other people that were there. Not sure how they pulled that off, but as the two are arguing about whether or not Tate knows the Breakfast Club, they come to the house. Violet runs outside and threatens the group. They realize she doesn’t know about Tate, but still call her disturbed. Violet learns that they’re from Westfield High, which means nothing to her, but everything to viewers who saw this foreshadowed in the first episode. Tate’s visions about coming to school and killing everyone weren’t dreams…they were memories.

Back at the psycho love triangle, Hayden and Vivien are finally face-to-face, with both women realizing Ben hasn’t been upfront with either of them. Nora rescues Ben from the basement, but only so he can save the baby. Hayden continues to rant about wanting to matter (at least she’s consistent) and Ben admits that he’s cheated more than once. Oh Ben. 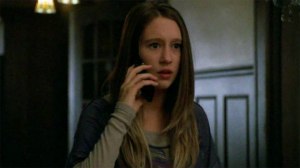 “She wanted to be a pretty girl.”

Finally Addie’s death is addressed. Constance talks about the feelings of immortality when a child dies before their parent as we watch her put makeup on her daughter for one last time (I wasn’t the only one that was waiting for Addie’s eyes to pop open, right?). We learn that Tate is Constance’s son, but she tells Violet not to let him know his sister died. This is just one of a few puzzling things about this reveal, the other being why Ben never mentioned this before…assuming he knew.

Tate makes it back to the beach, chased by the group. They demand that he acknowledges what he’s done, but Tate genuinely seems to not know or remember. The cheerleader mentions that she would have been 34, so we can assume this happened at least 16 years ago. The group leaves with the sun and so ends Halloween night.

We finally see most of the ghosts (??) together: Denis, Moira, Chad, Patrick, Nora and the nurses all enter the house as the sun comes up. We assume that’s where Hayden went when she disappears from the cop security car. We still don’t know why all of them are tied to the house, but at least we know a little bit more about what happens to people that die there.

Right now we know the most about Tate and Constance, and I find both of their stories interesting. I’m still a little unsettled by how slow the pacing is for this show, but given next week’s promo, I think we’re finally going to see what all of this means.