grimm recapping: bears will be bears

Episode based on “Goldilocks and the Three Bears.”

The story begins just minutes after the pilot episode ended. Thrill-seeking girl Gilda and her boyfriend Rocky break into a house in the woods, raid the fridge, try on fancy clothes and then try out several of the beds in the house. The one in the master bedroom turns out to be just the right size and Gilda and Rocky are getting busy when she suddenly hears a noise outside. Sure enough, someone has pulled up in a sinister black car and the couple has no choice but to bail out a window. Gilda makes it out but Rocky is not so lucky.  He’s pulled back inside the house.  When Gilda hears him scream, she bails, driving his truck away as something large and furry comes after her.

Cut to Nick in the hospital, being bandaged up after foiling the attack on Marie. The doctor tells him he was injected with a substance similar to spider venom and that he’s lucky–it could have killed him. He wants to talk to his aunt but Dr. Rose won’t let him. Marie isn’t stable, she tells him, and she doesn’t want to risk her slipping back into a coma. Captain Renard shows up and assures Nick he’ll put a guard in ICU to protect Marie after he, Hank and Nick review security tapes showing the back of the lovely blonde assailant.

Back at headquarters, police have brought Gilda in on a DUI. She’s raving about being chased by some kind of creature. She’s very worried abotu her boyfriend and leads the detectives to the house in the woods. The owners, Frank and Diane Rabe, have some freaky taste in decor, including cases containing ancient weapons like a Fijian war club and a scary claw thing  used for disemboweling. (Turns out Marie has one just like it back at the trailer.)

Meanwhile, Rocky is tied up and blindfolded in a cave, being menaced by shadowy, furry figures. Nick and Hank take Gilda back to the interrogation room where she tearfully blames herself for whatever has happened to Rocky. Nick and Hank talk afterwards, trying to put the pieces together. Rocky’s father is a truck driver who cancelled the boy’s cell phone to save money, so they can’t track him that way. The truck, which Gilda was driving when she was arrested, has been impounded.

Hank floats a theory. Maybe Rocky’s dead. Maybe there was an accident. Maybe Gilda hid his body. Nick doesn’t think so–she seemed much too upset about Rocky being missing. He’s distracted by a call from Marie, summoning him to her bedside. 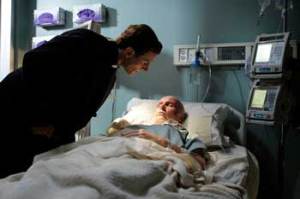 She knows she doesn’t have much time left, even if no evil creatures try to attack her again and she once again emphasizes that his mission is to track down the bad creatures from her books and deal with them. She also warns him not to let anyone find her trailer full of weapons and arcane knowledge. Nick needs to know more but she starts coughing and choking, so Dr. Rose sends him away.

Nick and Hank go back to the woods near the Rabe house to look for Rocky and run into Barry Rabe and a couple of his friends, who are larking about on motorcycles. They follow the boys to the house where Nick’s GRIMM-vision sees the bear beneath Barry’s human mask. He asks him some questions about the night of the break-in and Barry’s mom suggests that he back off. Barry’s father, an attorney, suggests the detectives call him at his office if they have other questions. He’s an attorney. Nick and Hank back off, knowing they’ve hit a nerve. Hank announces he’s going to check phone records to see where everyone was, and Nick decides to reserach the totem pole in front of the house.

Renard meets with the blonde and tells her she needs to find someone else to go after Marie. While they’re talking, a bad ass shows up with bad intent and blonde, whose name we don’t yet know, “takes care of him.” (Note:  the bad-ass is just about the lamest bad-ass ever seen on network TV, but then, this is a 9 o’clock show.)

Juliette comes home with take-out as Nick surfs for information on the totem pole (note the Apple logo of the computer front and center screen) and reads off some information about bears. Juliet is concerned about how Nick is taking Marie’s impending death and he tries to convince her he’s dealing with it. She’s not convinced and they start kissing.

Meanwhile, Barry and his friends move through the woods with torches and throw a dummy into a bear-pit lined with spikes, impaling it. This is a dry run for what’s to come.

Nick is out in the trailer, doing research when Marie shows up in her hospital gown. She notes his drawing of the totem pole, comments it needs more red and goes over to her closet of weapons. “After sundown,” she says and then she stabs a knife through his hand. He wakes up gasping as a concerned Juliette asks him about his dream. Then she leaves, telling him she has to operate on a bulldog at seven. He goes out to the trailer for real and looks in Marie’s closet of weapons, finding the claw thingie, which he puts in a bag and takes to Monroe’s house.

Monroe, pissed at having his Pilates interrupted, identifies the thing as a weapon used by Jagerbars  for disemboweling. He tells Nick about a coming-of-age ritual that young Jagerbars endure–a bloody event that is “all about the chase.” Nick realizes that if he does not find Rocky, there’s a real chance he could end up bear chow.

Nick goes back to see Marie, telling her that he knows Barry and his family are jagerbars. When she hears that Barry is 18, she tells her nephew it could be a problem if his family is traditional. Meanwhile, Captain Renard tells Nick he has to pull the police protection on Marie. Manpower and resources are stretched thin.

Nick calls Monroe and convinces him to guard Marie, although Grimms killed his grandfather in a very grim way. Meanwhile, Nick gets word that Gilda has shown up at Rocky’s house and taken a gun. She told Rocky’s father that she was either going to get her boyfriend back or kill those who took him. Nick and Hank head for the house in the woods.

Gilda arrives first and confronts Barry’s mom. Barry, in were-bear form, attacks Gilda. His mother is very pleased. Now Barry and his bear-boyz will have a chance to hunt two rather than three for their manhood ritual.  She tells her son to get rid of the truck. Meanwhile, Frank Rabe arrives home moments before Nick and Hank arrive.

Nick talks to the parents as Hank heads off to look for signs that Gilda is on her way. And he finds her truck. Nick puts his cards on the table. He knows what the Rabes are and they know what he is so they need to cut the crap. Frank is horrified when he realizes that his wife–who is very traditional, has helped arrange the hunting ritual. As she goes back into the house, the Jagerbar patriarch agrees to help find his son.

Meanwhile, Barry and the other guys have stripped down to their tattooed torsos and set Rocky and Gilda free to run from them in woods that are suddenly and inexplicably filled with mist.

Back at the hospital, Monroe confronts Marie, who tells him to “take your best shot.” He refrains, but notices a guy walking by. Sniffing bad intent, he follows him into the bowels of the hospital where he is attacked by two men. He takes care of them and realizes he might have .. . gone too far. He calls Nick and tells him he has to bail.

Frank Rabe leads Nick to a cave in the woods where he finds Rocky’s shirt. He tells Nick it’s too late and he briefly morphs into his true Jagerbar face. They go after the young bears who are running bare-chested like a pack of werewolf extras from Twilight (except without the tans and six-pack abs).  They catch up to the group and Frank is trying to talk his son into surrendering when Barry’s mother, in full mama grizzly mode (literally) shows up and falls into the bear pit prepared for the two human prey.

Back at the hospital, a priest comes into Marie’s cubicle to kill her. She fights him and manages to kill him but dies of her own wounds in Nick’s arms as he arrives at the hospital.

Later, Nick drives the trailer away as Juliette watches. Later still, the two visit Marie’s grave, which already has a marker. They’re being watched by a sninister animal POV.

A word about the acting in this episode: The styles and skills of the actors varied wildly. Kate Burton owned every single scene she was in and her death scene was authentic and wrenching. (Remember her in Big Trouble in Little China?) Sasha Roiz as Captain Renard has such a low-key style that he pulls focus whenever he’s on camera and knowing that he’s one of the bad guys just whets our appetite to find out more about him.

Silas Weir Mitchell as the walking Grimmpedia continues to amuse and it’s clear that the writers are having a good time with him. He’s decidedly not low-key but Mitchell is making it work. That’s not so true for lead David Giuntoli, though. He’s still making faces to indicate his emotions rather than just being the emotions. It’s … distracting.

2 thoughts on “grimm recapping: bears will be bears”