“Most people believe we have free will, that we all choose our path. Sometimes the path is clear, sometimes not so much. Every twist, every turn can challenge our sense of direction. But it’s the choices we make when we reach a fork in the road that define who we are.” – Dexter

I was wrong. Just Let Go did not prove to be the episode where we finally learn the “secret” behind Travis and Gellar’s relationship. There were clues…but nothing concrete. That disappointment aside, there seemed to be a greater focus on the other dynamics, like Dexter and his Dark Passenger, Quinn’s downward spiral and the increasing redundancy of LaGuerta in every episode. Not everyone is in love with the major religious theme of the season, but without it, we might not have seen the return of one of Dexter’s more significant characters, as well as the loss of another. 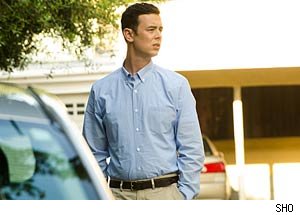 Of course with arguably one of the purest people Dexter has ever encountered ripped form his life, there was room for the darkest to return. One Brother (Sam) is gone and another brother (Brian Moser) comes back. Thank you for the symbolism Dexter writers. Judging from the promo, the Trinity Killer is back. And yes, we all know that’s not literal.