thoughts on dexter: get gellar

“I’ve had my dark passenger for so long that I can’t really recall life without it. Like someone who has grownup with a club foot or a stutter or a lazy eye.” – Dexter

Yes, please. Get Gellar. Help us all stop obsessing over whether or not Gellar is “real”. And if Gellar is somehow “fake” and not a living, breathing DDKing mastermind, explain to us why the twists and turns weren’t subtler. I genuinely hoped that this would be the episode that revealed all and helped the writers redeem themselves for what has (thus far) been one of Dexter’s most polarizing seasons. Could Get Gellar be all that and more? Well… 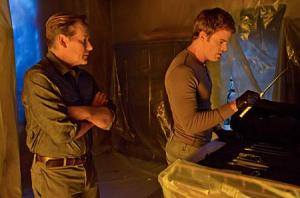 Next week, on Dexter:

One thought on “thoughts on dexter: get gellar”