There’s a rave going on in Portland and Retchid Kat is the man of the hour, wearing a Donnie Darko-esque red cat head and spinning tunes as his fans chant and gyrate. But while this is going on, a high school string quartet is practicing for a performance with demanding music teacher Dr. Paul Lawson demanding they step it up. He’s particularly annoyed with Carter, who isn’t nearly as good as another student who was kicked out of school for fighting.

Later that night, Lawson leaves school and gets in his car, only to be devoured alive by rats.

The next day, the high school’s assistant principal, Grace Kaplan arrives at work and sees Dr. Lawson’s car. Since it’s unusual for anyone to be at the school before she is, Grace goes over to the car to take a look. What she sees is the chewed-up carcass of the school’s music teacher.

At home, Nick and Juliette have just discovered that their refrigerator isn’t working when Nick gets a call summoning him to the crime scene. Sgt. Wu is already there, telling him and Hank that neither the coroner nor Animal Control want to open the door to Lawson’s car before they sign off on it.

Hank really hates rats, and when the door is jimmied open, they pour out of Lawson’s car.

Later, Hank and Nick find some cages nearby with the logo of Geiger Pest Control on them. The detectives head for a really nice neighborhood in Portland where the four kids who play in the string quartet are gathered at Sarah’s home. Her mom, Mrs. Jessup, is a tightly wound socialite type who is not happy when one of the boys—Sarah’s boyfriend—brings up Roddy Geiger, the son of an exterminator. Mrs. Jessup tells the detectives that Roddy is a very disturbed boy and that they shouldn’t discuss him in front of the teens.

What do you bet “Roddy” is a sly reference to “Rowdy Roddy Piper?” which ties into the Pied Piper theme of the show?

Hank and Nick track Roddy down to the property where he lives with his father in a trailer. The contrast with Sarah’s home could not be more different (or more heavy-handed—this is not a subtle show). Both Roddy and his dad are creatures known as “reinigen” and they recognize Nick as a Grimm. The old man resists arrest and is cuffed by Hank while Nick chases after Roddy. Both are hauled into police headquarters and questioned.

Roddy’s father doesn’t really have an alibi—he was in the woods catching rats—but Roddy does. He IS Retchid Kat and the promoter of the raves where he appears backs up his alibi.

Roddy’s released but his dad is held.

Meanwhile, Dr. Harper calls Hank and Nick down to the morgue where she tells them Dr. Lawson died of a heart attack. And she also shows them the necropsied body of a rat, which has fibers in his stomach that did not come from Lawson’s car.

Hank and Nick go to see Captain Renard, who tells them that the press is clamoring for a statement.

Roddy goes over to Sarah’s house to tell her that he did NOT kill their music teacher, but that her boyfriend did it and framed him and his dad. Sarah’s mother comes out and sends him away.

On his way back to his side of town, Roddy is confronted by Carter, the musician who took his place on the string quartet, and Sarah’s boyfriend. They exchange sharp words, but Carter has his finger on his smart phone, ready to dial 911 if necessary.

Captain Renard gives a press conference and assures the media that the killer of the “beloved” music teacher will be found.

Lawson is referred to as a “beloved teacher” all the way through the episode but we see absolutely no evidence that he was anything but an asshole and a hard-ass. Just kind of a weird place where the writers are trying to force a characterization that isn’t there.

Hank gets info about the lab report that indentifies the nylon and other fibers in the rat’s stomach as being consistent with car carpeting. Mrs. Jessup comes to headquarters, demanding to know why Roddy hasn’t been arrested. Hank takes her class consciousness seriously.

Nick leaves and pays a visit to Eddie, hoping he can talk some sense into Roddy before he does something stupid. Then he goes home where a refrigerator repairman with an ass crack the size of the Grand Canyon FREAKS OUT when he sees that Nick is a Grimm. He runs out of the house and Nick suggests going out to dinner.

Sgt. Wu and Hank go out drinking but Hank begs off staying for dinner. On his way out, though, he runs into gorgeous Adalind Schade, the shady lady who tried to kill Nick’s Aunt Marie. She invites him to dinner and well, Hank’s only human (unlike her) so he says yes.

Outside the restaurant, Captain Renard looks brooding and then drives off. Since Adalind doesn’t make a move without his approval, we have to think that he’s set this whole thing up and that he has plans for Hank.

As he promised he would, Eddie shows up at Roddy’s house and is very impressed by his ability with the violin. He tells the kid that he needs to cut Nick a break and let him help him. He then leaves and phones Nick to tell him he thinks he got through to him.

But no sooner has Eddie left than Roddy gets a call telling him that his father has been injured in jail and can’t have visitors.

A distraught Roddy trashes the trailer and then releases all the rats before setting fire to the place.

He then takes the Retchid Kat head and his violin and heads for a building where raves usually happen.

Meanwhile, the two kids who actually put the rats in Dr. Lawson’s car are getting nervous. Sarah is sure they did it but there’s no way she can prove it. Hank and Nick, however, track the fibers to Carter’s car and force his dad to open the SUV. Captain Renard has told them he’ll issue a warrant.

Carter has told his father he’s at the movies with friends and so has Sarah. When the detectives go to Sarah’s house, her mother calls her and finds that her daughter left her cell phone at home. But they see a text message summoning her to a rave. 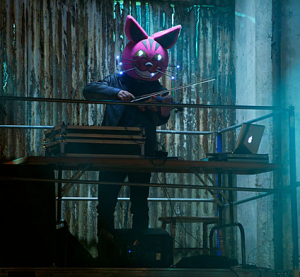 Roddy has brought all the rats to the rave and sets them loose on the kids. They’re freaking out when Hank and Nick arrive. The boys confess and Nick goes after Roddy for a talk about what he did.

Later, the Refrigerator Repair Man returns to Nick and Juliette’s house and asks for his tools. He tells Juliette he doesn’t want any trouble and leaves her … perplexed.

Best scene in the show: Roddy heading for the rave at the end with the rats trailing behind him. It was pretty eerie.

Some thoughts on characters—Sharon Sachs rules as Dr. Harper, the pretty, plus-size, quick-witted coroner. She has been a regular on several series—The Chronicle and Huff—and is also, according to her IMDB page, an award-winning designer. Sachs doesn’t get much screen time but she makes the most of what she has.

That’s also true of Reggie Lee, whose Sgt. Wu is getting more and more “play” with each episode. In this one, he’s introduced as Hank’s drinking buddy, and the writers are starting to give him the kinds of lines that would be trailer lines in movies.

Then there’s Juliette. Bitsy Tulloch is a lovely woman but she was shoe-horned into this episode with its over-the-top subplot about a refrigerator repairman who recognizes Nick as a Grimm. There’d better be a “very special episode” with her coming up soon or the producers should really think about axing her character. She’s not interesting. She’s not contributing. And Nick’s relationship with Eddie Monroe is a lot more intense.