There’s a full moon out and a big guy named HAP is smoking and drinking and working out with a Shake-Weight (shades of the late, great John Candy’s “Johnny LaRue” character) when an over-enthusiastic shake sends the weight out the window of the geodesic dome where he lives. He’s outside retrieving the weight when his home blows up behind him, destroying his Iron Butterfly album and his comic book collection.

The next morning, as firefighters finish up at the scene, Nick and Hank arrive to talk to Hap who, under stress, reveals he’s a blutbad to Nick’s GRIMMvision. Note: the writers are really sloppy about day/night transitions on this show and this episode is one of the worst offenders so far.)

Hap tells the detectives that he can’t imagine anyone wanting to hurt him but does mention that his brother Rolf died in an explosion at his home some weeks earlier. 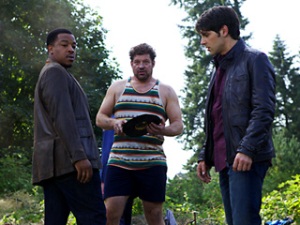 At the police station, Hap makes a call to a friend, asking if he can stay with him just until he gets back on his feet.

Hap reveals that he owes money to a lot of people for ill-considered business ventures (like a strip-mall creperie) and as Nick is getting the particulars, a mysterious motorcyclist pulls up to the remains of Hap’s house and takes a framed photo away.

Monroe shows up at the precinct to retrieve Hap (and he does not look happy). He tells Nick that he and Hap went through a treatment program a long time ago.

Hap is surprised to find out that Nick knows Eddie and wonders aloud if his friend got arrested for doing some of the “stuff you used to do.” Logic point: Hap does not recognize Nick as a Grimm, even though others in the episode do. How is that?

Nick and Hank check in with Lt. Orson, the arson investigator who checked out both explosions. He tells the detectives that although it seems like a real coincidence, he found nothing to indicate foul play at either scene.

The detectives decide they’re going to check out the beneficiary on the insurance anyway. Hank heads for the insurance company while Nick goes off to Eddie’s house to talk to Hap.

Meanwhile, the mysterious motorcyclist is sitting right outside Monroe’s house. Inside, Monroe is giving Hap the house rules. He also hands him some clothes to wear, including a Brown sweatshirt. Turns out Monroe went to grad school at Brown.

Nick shows up at Monroe’s house and is attacked by the motorcyclist, a female blutbad who turns out to be Hap’s sister and Monroe’s ex-lover Angelina. She wants to kill Nick because he’s a Grimm but also because killing things is what she does. Unlike Hap and Monroe, she’s still into the life. 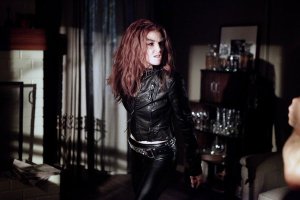 Hap admits he inherited Rolf’s money and Angelina admits she’ll get Hap’s, but she has an alibi for the night her brother died—she was in New Orleans visiting “Adam,” a butcher that Monroe knows. (He’s very disappointed in her.)

Nick tells Eddie not to let Hap leave his house and heads over to the storage place to check out Marie’s books. He sees a drawing of a blutbad being struck in the back near the base of the spine.

Back at Monroe’s house, Angelina is working her bad mama mojo on her ex-lover, getting him to swig booze straight from the bottle and go for a midnight run in the woods. Cue the crashing metal on the soundtrack and the blue lighting.

Back at the trailer, Nick gets a call from Sgt. Wu who has run the plates on Angelina’s motorcycle and found nothing of note—some parking tickets is all.

Nick goes over to Angelina’s house and doesn’t see anything dangerous. He spots a picture and is looking at it when he is attacked by … something … that crashes out the door and leaves him with a photogenic head wound.

Eddie and Angelina wake in the woods and Eddie is horrified to see blood on his hands and a bloodied animal carcass nearby.

Meanwhile, there’s a knock at the door of Eddie’s house. Hap is delighted to hear that it’s a delivery man with an order of pork ribs. He thinks Eddie ordered them for him and tells the man to come in. (Someone’s trying to kill him but he left the front door unlocked? It’s Portland, not Mayberry.)

At the door is a guy with a gun who unloads on Hap, putting three bullets in his chest and one in his head for good measure.

Monroe and Angelina show up, ducking under the crime scene tape. They’re very upset. Nick and Hank haul them both in for questioning and Hank asks Angelina about the blood on her tank top. Provoked, she peels down to her sexy black bra and throws the tank at Hank.

Wu runs the blood and it turns out to be rabbit blood. Eddie admits to Nick that he “lapsed” and Nick suggests he consider the possibility that Angelina is not the right girl for him.

Eddie and Angelina are released but Hank has prints from the drinking glass she used and tells Nick he’s going to run her prints.

Angelina and Monroe have a heated argument as they leave the police station and she roars off on her motorcycle.

Nick gets home to find Juliette fixing up a neighbor’s cat, which has apparently taken on a dog and won. She tells Nick, “Never piss off a woman with claws,” which triggers a flashback to him being attacked by Angelina.

Meanwhile, Angelina arrives home. (Which is apparently so far out of town that even though she left the police station in full daylight, it is now full dark.)

She goes through her house with her special wolf-vision (which Monroe apparently lacks) and realizes that a Bauerschwein has been in her house. There’s a long history of bad blood between the blutbads and the pigs.

Back at the police station, Hank and Nick discover that partials matching Angelina’s were found at the scenes of two unsolved murders in Eugene. The victims were brothers named Orson, which also happens to be the name of the arson investigator.

They immediately bring their suspicions to Captain Renard, who tells them he won’t protect a dirty cop but he wants them to be sure of their accusations.

Meanwhile, Eddie is washing Hap’s blood off his stoop when Angelina drives up. She tells him she knows who killed her brothers—it was a “pig.” She wants him to help her tear out a little pig throat but he’s done with that. She tells him she still loves him and drives off.

Eddie goes back in his house, kicks over the bucket of bloody water and trashes his place. Then he calls Nick to tell him about Angelina and the pig.

Nick confronts Orson, who transforms into his pig self under pressure. (Giving new meaning to the term “pigging out.”)

Nick then heads for Monroe’s, looking for Angelina. Eddie tells him that he doesn’t know where she is and he won’t help him anyway. He wants the pig dead too.

Angelina shows up at the police station—dressed to kill in a sexy little black dress. She tracks Orson’s office by scent and is rifling through his desk when another cop shows up and asks her what she’s doing. She throws him over a desk (and not in a good way) and continues to stalk through the precinct house.

Orson shows up at Eddie’s house with a shotgun and tells the blutbad that Angelina is a monster who needs to be put down. She killed his brothers, he tells Monroe, just for fun because it was something to do on a Saturday night.

The bauerschwein tells Monroe that “change is never easy, but you can’t say I didn’t try.” 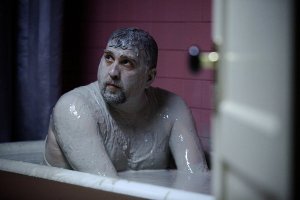 Nick goes to Orson’s house (brick, so the big bad wolf can’t huff and puff and blow it down) and walks in the unlocked front door. He goes into the bathroom where there’s a tub full of mud and turns his back on it. (Honestly, for a cop, Nick has the WORST situational awareness ever.)

Orson’s in the tub, taking a mud bath. It’s a bauerschwein thing, he tells Nick.

Nick tells him to get dressed, he’s under arrest.

Angelina shows up and Nick is forced to shoot her.

But … he doesn’t kill her and she runs off, leaving a blood trail behind her.

Monroe is sitting at his computer, looking through snapshots of his bad old days running with the wolves.

He gets a call from Nick telling him Orson’s been arrested and Angelina is in the wind.

Monroe finds the broken, framed picture on his doorstep. Angelina has left it there.

Nick has made a bad enemy.

Best scene in the show: Orson in his pig form rising out of the mud bath like Martin Sheen in Apocalypse Now.

Random thoughts about character: It’s official. Six episodes in, Eddie Monroe has become the show’s “Fonzie.” The writers clearly enjoy writing for the blutbad more than any other character (including their lead) and with this episode; we now know way more about Eddie than we do about Nick. Juliette continues to be an afterthought in the show, and the brief scene with her stitching up a neighborhood cat is so clunky that it shouldn’t even have been there while Sgt. Wu is getting so much face time; the writers really should give him a first name. Captain Renard, whose first name is probably something French, just got one walk-and-talk scene in this episode, and that’s a shame. Ever since he revealed himself to be Portland’s resident paranormal bad-ass, I’ve been wondering what’s going on with that.