I know that Glee is a musical – more than less – but that doesn’t mean when Christmas comes reindeer’n around that we can just throw the plot out of the way. Besides the fact that we heard more songs than The New Directions sang at sectionals, nothing else happened! I found myself not paying attention through parts of the episode, not fast forwarding through the commercial breaks, and even leaving the room WITHOUT PAUSING!!! If it isn’t that obvious by now, I really didn’t like the episode. I know Artie was hoping to make a “cult classic” but this may be more Santa Claus Conquers the Martians rather than The Star Wars Holiday Special.  Here are a few questions and complaints: 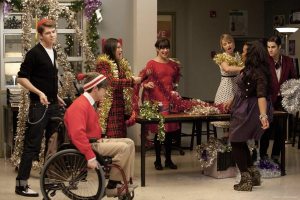 “All I Want for Christmas” – Mercedes (A)
All of the playful fun of an Old Navy ad without the assertion that you buy a sweater or cargo pants. This really made me want a Mariah Carey- themed episode before the group’s vocal core graduates.

“Blue Christmas” – Rory (B)
Please, oh please let Damian McGinty stick around. His voice is romantic and made for crooning. This performance wasn’t the jolliest of holiday classics, but the episode almost OD’d on cheer just fine without it.

“River” – Rachel (B)
Another, slightly melancholy, performance. Rachel was gorgeous and sounded amazing, as always, but just like Artie, I wanted something more.

“Extraordinary Merry Christmas” – Rachel and Blaine (C)
Blaine played off of Rachel, while Rachel played off of the crowd. Glee original songs have always been either a huge hit or miss for me, and unfortunately, this fell into the latter category. One thing I did love that had almost nothing to do with the performance? The holiday Cheerio costumes.

“Let It Snow” –Kurt and Blaine (B)
This is the kind of corny you can only get away with at certain times, the holiday season being one of those times. Anytime Kurt and Blaine scat together, while dancing around a fully furnished living room, I’m obligated to find it adorable.

“My Favorite Things” – Rachel, Mercedes, Kurt and Blaine (B)
I don’t think we’ve ever seen this group sing together, but I hope it won’t be the last time before the season ends. I almost forgot that before Rachel stole Kurt away, he was Mercedes’ BFF.

“Santa Claus is Comin’ to Town” – Puck and Finn (B)
Visually, the Star Wars costumes were a tad distracting, but overall this was really good. Blaine’s addition with the harmonica somehow fit. I don’t know what Artie’s complete vision was for this special, but I’m pretty sure this is where all of his ideas finally intersected.

“Christmas Wrapping” – Brittany (A)
Brittany sounded a little off, but, I love this song and I could watch this performance more than once. Although it kind of clashed with everything else that was going on and I would have preferred to see it in bright colors at another location, this was still one of my favorite performances of the night

“Do They Know It’s Christmas” – New Directions (A)
The musical bow to wrap up a pretty full evening of performances and what makes this song especially meaningful? 100% of the proceeds will be given away, something charitable on and off-screen.