Previously on House of Lies: Gods of Dangerous Financial Instruments

Marty and his team (Jeannie, Clyde and Doug) head to Phoenix to wield their magical consultation powers and repair a fractured sports franchise. The Huskie owners are divorcing and as is usually the case, things are messy. Jeannie thinks she’s meeting up with her ex-beau, Derek, for brief hookup, but finds out that he’s really there to offer her job opportunity. Throughout all this, Marty continues his ongoing battle with Roscoe’s Principal Gita over his son’s affinity for cross-dressing. 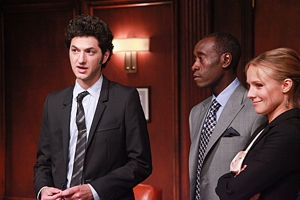 Marty and Monica continue their ex-sex, which results in an amazingly crass exchange and a mention of tickling taints. So far, I love the way Marty’s little life lessons are interlaced into his personal and professional life. He was able to instruct us on being ‘willing to violate’ so that ‘all that’s left is the yes’ using the visual of him “violating” his ex-wife”. The opening scene ending with them choking each other until they were both forced to cry out the safe word, “Amsterdam” of course.

Doug and Clyde immediately knew Marty recently had sex, which notes the closeness of their team, something I really want to see develop over the season. Jeannie is the perfect fit in their boy’s club, but she does consider leaving them for another firm. Marty’s obvious “maybe I did, maybe I didn’t” response to Jeannie when she realizes that he killed the deal she was working on let us know that Marty has a bit of a heart and that in his eyes, Jeannie is an invaluable part of their puzzle. Speaking of that puzzle, if Doug is the numbers guy and Clyde provides the visuals, and Marty’s obvious role is obvious…what does Jeannie bring to the table?

If Amsterdam is any indication, this show will follow a basic formula: team gets a client, team visits client, team saves client and/or team loses client, team bonds and episode ends. It also demonstrated that this show has something that makes it fun to watch, with Don Cheadle’s Marty channeling Ari Gold if he was single as one of the main draws. Outside of Marty the Kaan-man (I’m sure whoever thought that up was especially pleased with themselves), here were the other great things about this episode:

One thought on “house of lies recapping: amsterdam”