Sam joins the synchronized swim team in order to get his Letterman’s jacket. He is still trying to get Mercedes back into a relationship after their “summer fling”. It seems as though Mercedes may be having some of the same thoughts but she is still in a relationship with Shane.

Becky has become enamored with Artie because he is someone who understand what it is to be handicapped. They go on date with each after Artie stands up for her – no pun intended but as I’m writing this I’m beginning to doubt that – against the wishes of The New Directions. Ultimately he decides he doesn’t want to be in a relationship with her.

Finn tells Mr. Shuester about his plans to enlist in the Army to do something with his life. He is also inspired by his “war hero” father. After an intervention of sorts with his mom, Burt, Mr. Shuester and Pillsbury Finn finds out that his father was dishonorably discharged and died of a drug overdose.

Mr. Shuester gets The New Directions to  help him propose to Emma, with the help of the synchronized swim team. Finn proposes to Rachel. 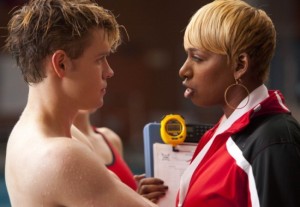 Summer Nights – Sam and Mercedes (and the New Directions)

The writers chose to go with an unconventional pick for the couple to sing this Grease classic and not because Sam and Mercedes are of the interracial lovin’ variety. Instead these two were a unique pick because they weren’t Rachel and Finn, who would have usually been called upon to do this song, had it been the first season. I wish they would have done the song in its entirety, but it was a really cute rendition anyway. I especially loved that Sam didn’t mess up that awkward Travolta note at the end. (A)

Sue and Beiste’s nod to the royal wedding was my favorite thing about this performance. I love Emma and I thought it was cute that much of what she sang was actually to Schue, but it didn’t really woo me from a “OMG, I have to go download this right now” standpoint. She should leave the musical overtures to her hubby-to-be…unless it’s a duet….or a better song. (C)

I slowly grew sick of the Jagger-inspired dance song over the summer, so when the beat started I fought back the desire to roll my eyes. Fortunately, this was a mash-up, which in the Glee-verse can make any song a little bit better. Another bonus was the hip gyrations courtesy of Schue and Mike (I would have appreciated a little more Blaine at the forefront of that as well). When it comes to performances, Artie always adds his own little spark, which really makes him one of the better characters on the show. A great performance indeed, but a proposal song it was not. (B)

First Time I Ever Saw Your Face – Rachel, Tina, Mercedes and Santana

To quote Mercedes, “That song was so beautiful and moving.” When Rachel’s eyes glisten the first few seconds of the song, you know its going to be a good performance. What I liked more about this one was seeing each girl and the moment she saw her true (high school) love’s face. Although the writers are attempting to drag out this “will they/won’t they” romance between the two, it was to be expected that Mercedes would see Sam’s face as she was singing. Very pretty performance and it was probably the closest thing we’ll get to seeing The Troubletones perform on this show again. (A)

I’ve always thought this was a corny dance song, yet I sing along when it comes on the radio and never understood why. Thank you Rachel for making me realize it’s all in the lyrics. I love when Glee takes a song I’ve heard far too much and changes it just enough that I’m able to like it all over again. It was funny that Santana bashed Rachel for making the assignment all about her with this selection, when all of the couples seemed to get into the lovey-dovey mood. (B)

We Found Love – Rachel and Santana

The performance began with a (slightly creepy) walk down the hallway, where Emma was given white roses. Then we enter the gym and see that everyone is dressed in their finest 1920’s bathing suit attire. Aside from the fact that Artie pushing himself in the water could have resulted in a major lawsuit for the school and ignoring that there’s no way everyone learned how to do a full synchronized swimming routine in such a short amount of time, this was the cutest way Schue could have proposed to a woman like Emma. This wasn’t a conventional pick, but it works with the quirkiness of this couple. I’ll admit, I was a little nervous she was going to give him a “I love you, but I can’t marry you”. (B)

One thought on “glee recapping: yes/no”