Leave a comment
By nicolewritenow parks and recreation, quotes, Recaps

Previously on Parks and Recreation: Bowling for Votes

In this Valentine’s Day-themed evening, Leslie was manically playing matchmaker for Ann aka the ‘beautiful spinster’. Doesn’t it seem like just yesterday Ann was trying to fix Leslie up with Chris, the annoying MRI technologist? Oh how the romantic tides have turned in our little Pawnee.

When Adam Scott tweeted that Party Down fans were in for a surprise, I knew two things: bloggers across the interwebz were going to use (and abuse) “Are we having fun yet?” and ‘Operation Ann’ had the potential to make up for last week’s so-so episode. Mission accomplished. I watched it with the giddiness of Ron solving riddles and you know it was a good episode when creepy Oren hiding under the table wasn’t the best thing to happen. 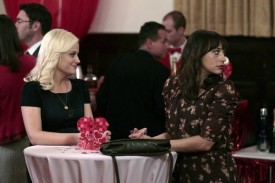