thoughts on glee: the spanish teacher

With a tenure position up for grabs at McKinley all our favorite teachers are trying to make a good impression on Principal Higgins. Will must actually learn Spanish at night school. Sue is trying to prepare herself for…pregnancy? Roz is critical of the Cheerios’ dance moves. Meanwhile, Sam and Mercedes go to Emma for help about their secret relationship.

Showing Some Duende: I liked that David Martinez (Ricky Martin) inspired the glee club to move outside of their comfort zone with the song selection. I enjoyed his attempt to mix LMFAO’s “Sexy and I Know It” – emphasis on attempt. I couldn’t help but want to buy some teeth whitener afterwards as well. I’m not sure if his character is going to be one of my favorites going forward if he sticks around at McKinley because I don’t see what else he can be used for besides starting a rival glee club.

Seriously Sue? I’m not even going to try to make sense of Sue’s post-menopausal urges to have a child. I know she was great with her sister and is trying to treat Becky in the same manner, but would u really trust Sue with an impressionable child? Kudos for being able to freeze your eggs 30 years before the technology existed though

Rivalry with Roz: Maybe Sue’s competitive drive is lacking or maybe she is just preoccupied with her new pregnancy phase or maybe Roz is just a worthy opponent? Either way, I’m game. Will has proven that he can’t sustain an offensive attack against Sue but I think Roz will do just fine. We have grown use to Sue’s diatribes directed at the glee club and – pretty much – every other person who gets in her crosshairs, but now it seems that Sue is going to be on the receiving end a little bit more so than she is use to.

Seven Days of Silence: This Sam/Mercedes relationship to be – or not – is starting to get annoying. Every time we get close to something materializing their morals get in the way of a good affair. I honestly never thought that the relationship would develop as much as it has since his return to McKinley but it is a good storyline for the second half of the season since it’s clear we’re over Santana’s homosexuality, Blaine’s transition to The New Directions (Get well soon!), The Trouble Tones, and Beth. 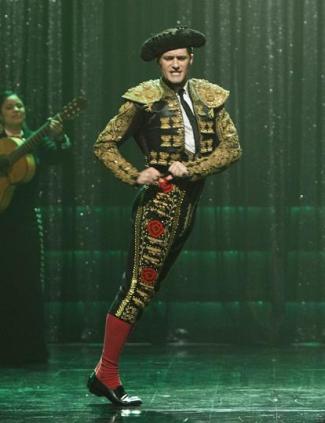 This was definitely a crushing return down from last week’s MJ high. I’m disappointed that there wasn’t even a hint of Livin’ La Vida Loca or even a few bars of She Bangs. Similar to Santana I was disgusted with La Cucaracha and I may be mistaken, but did they bring in a new band just for this episode? Regardless, I was muy decepcionado.

Sexy and I Know It – David and the New Directions (C)

This performance was painfully average, but Suga’s pushups, Finn’s body roll, Puck’s chopping, Artie’s chair dance and, Brittany and Mike’s overall dance moves certainly helped move it along. Ricky Martin had great chemistry with the group, but he’s Ricky Martin, the man who helped start the Latin invasion in the late 90s, so the bar was set a little higher than what he gave us. Kudos on the nod to the LMFAO robot man.

Don’t Wanna Lose You – Mercedes (B)

Great ballad and the perfect way to talk to the guy you can’t actually talk to because you’re on a week-long no contact. I thought it was sweet, but not entirely memorable. Unlike most of last night’s performances, it was a song pick that was relevant to their weekly assignment and the overall plot. Darn these two for slowly becoming my favorite non-couple.

Who knew bolo ties could look so adorable? Besides Sam and Tom Haverford, of course. Albeit a little corny, this performance was really cute. I would have loved it if Sam was alone, with his guitar, serenading the whole room singing just Hero. Clearly the writers wanted to go a more silly route.

If this had been anyone else, the performance would have easily been the best of the night. However, when Naya Rivera and Ricky Martin are on stage together, things should happen. Hot things that are just a little bit inappropriate. Sadly, there was none of that. It wouldn’t have been the first time a student/teacher performance crossed a line or two on this show, so there’s really no excuse for why these two looked more like cousins than mutually sexy individuals. Unrelated, but still hilarious: Puck’s childlike fascination with the lights.

A Little Less Conversation – Will (C)

Schue’s outfit, along with Mike and Brittany as bulls, should have been enough to get this one a failing grade. However, I know the whole point was that it was supposed to be bad and in poor taste. With so many other less than amazing performances, they really didn’t have room for a throwaway here.