Previously on Game of Thrones: What is Dead May Never Die

If you want to be god of the battlefield, it really helps to have a big, scary uber-wolf on your side. Robb Stark and his direwolf Grey Wind launch another surprise attack on the Lannisters, who must have the worst lookouts in the history of Westeros, and win. After the fighting, Robb spots a woman treating the injured on the battlefield. He’s surprised to find that she is both of an appropriate age and attractivness to be considered a potential love interest for himself (and that she questions his authority and talks back to him…but mostly the attractiveness part). 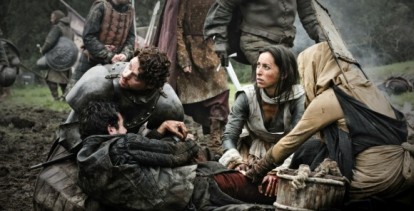 For all the loyal fans who missed Joffrey’s charming antics, this had to be a welcomed episode. Highlights include Joffrey ordering Sansa, his future wife, to be stripped and hit in front of the entire court and forcing the two whores his uncle Tyrion purchased for him (don’t ask—it’s a weird family) to beat each other. I don’t know if psychology exists in Westeros, but this kid could single-handedly support and justify the entire profession. 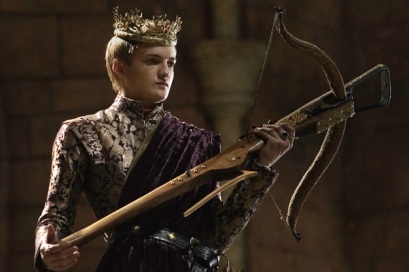 Over at Renly’s camp, Petyr arrives to stir up trouble. He tries to figure Margaery out, well aware that her brother Loras is the king’s real lover, but the new queen uses some weird turn of phrases to either impress or confuse him (“My husband is my king, and my king is my husband”—what?). Petyr also finds time to profess his love for Catelyn, but she’s disgusted and rejects him. 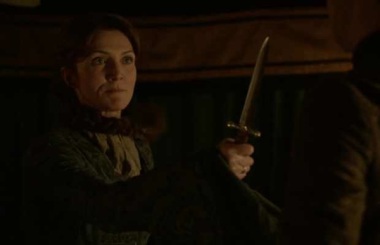 Things are looking up for the other women of Westeros. After a distubring jaunt as a prisoner of the merry Harrenhal torturers, Arya and her friends are rescued by Tywin Lannister. They’re still prisoners, but now Arya gets to be Tywin’s cupbearer. Dany and her dying khalasar find their way to the walls of the utopian city of Quarth where, after a tense showdown, they are allowed in by a merchant named Xaro Xhoan Daxos. Meanwhile, Melisandre, otherwise known as she of the red dress and creepy accent, gives birth to a black smoke creature. Yeah, it makes as much sense as it sounds, but here’s betting it spells bad news for someone in next week’s episode!

Body count: too many to count – We get a battlefield strewn with dead bodies plus the two prisoners tortured to death at Harrenhal.

Roose Bolton: “The high road’s very pretty, but you’ll have a hard time marching your army down it.”

Tyrion: “I am not threatending the king, sir, I am educating my nephew. Bronn, next time Ser Meryn speaks, kill him. That was a threat. See the difference?

Dany: “When my dragons are grown, we will take back what was stolen from me and destroy those who have wronged me. We will lay waste to armies and burn cities to the ground. Turn us away, and we will burn you first.”

One thought on “game of thrones recapping: garden of bones”