Here’s what you missed on Glee: Prom-asauras

“My name is Tina Cohen-Chang!” Tell ’em Tina! For a person that has been on the show since the pilot you would think Tina would have more screen time. Or maybe you don’t? Which is probably why we  (I) didn’t even notice her fashion changes over the course of four seasons. I honestly forgot that she was a year behind all of the relevant characters. Maybe Tina will get to live out her dream of being Rachel next year? But most likely she will be relegated to singing behind some new prodigy that happens to stumble about the campus. Cheers to Tina and, more importantly, obscurity.

Talk about Mash-Ups… Question: Why the h3!! wasn’t the whole episode done inside of Tina’s mind? Answer: Who’s Tina? But seriously, if you didn’t think Puck and Finn were the most intimate versions of Blaine and Kurt that we’ve ever seen then you must be delusional. Shuester’s “Sue-Suit” gave off that Eric Northman vibe. Santana is still the hottest living organism in Lima, Ohio while she’s portraying Artie. I know I gave Blaine a hard time about his “broccoli” head, but I’d rather see that than seeing him with Puck’s mohawk. Maybe going all Bizzaro World in the mind of character that barely exists for an entire episode is a stretch–I get that. But Glee, why must you tease me with genius?!

Puck Lucked Up: For a brief second–more like two weeks–I thought Puck was going to be staying around McKinley for another year due to his failed grade. Maybe (Definitely) that was just a little part of myself that still doesn’t want to let go off the original cast–and I shouldn’t be blamed for that! I’ll admit it was bittersweet when Puck was told that he could retake his European Geography final. I would have never been so happy to witness someone fail a grade in my life. Or maybe I should just say “congratulations”? Whatever, I’m so over it anyway… 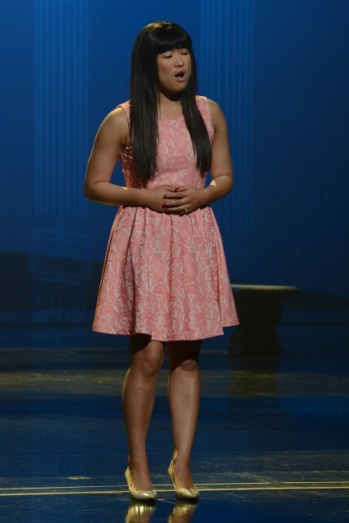 I Won’t Give Up – Rachel (A) If you’re like me and you felt that “I won’t give up on us” sounds like Rachel was singing to herself, as well as her hopes and dreams, then this could be considered a narcissistic song pick. Who cares, it was fitting and the future Mrs. Hudson sounded amazing.

Because You Loved Me – Tina as Rachel (A) Her mannerisms were completely spot-on, including the way Rachel closes her eyes when she’s really into the lyrical content of her song choice. Although this technically wasn’t a Tina performance, Jenna Ushkowitz definitely set the stage for Tina to move to the forefront of the glee club next season.

Mean – Puck and Beiste (A) This was an unexpectedly awesome duet from the two people who’ve experienced (arguably) the roughest moments of the season.

Flashdance (What a Feeling) Tina and Rachel (A) Almost definitely the first and last time we’ll hear these two together, which is a shame since they have such similar bouncy, energetic energy. Everything about this performance was the perfect way to head to nationals.

“Trick or treat, badabing!” – Kurt/Snooki
“Hey, what’s a guy gotta do to get a candy situaiton up in here?” -Blaine/The Situation

“William, I can taste your Axe body spray.” -Sue

“Getting metal sparks on your face is how you get freckles.” -Brittany

“The truth is, it takes a lot of crystals to make something shine.” -Tina

“I don’t think I’m allowed back in Chicago after I body slammed Refrigerator Perry during a bar fight.” -Coach Beiste

One thought on “glee recapping: props”