However, last season’s episode 19, Letters of Transit,  is much more relevant to this season

My beloved show is back– and I am so, so, so, so excited! I can’t believe that this is the last season, but it makes me feel a little bit better to know that we’re getting a proper ending. I don’t really know what else to say. I do know that my Fringe posts are really fangirl-esque, so I will keep my squealing to a minimum, especially in the recap part of this post. We shall see how this goes.

Letters of Transit is crucial to this season. It served as the introduction and background, and a thrilling and exciting episode to watch. The last season premiere of Fringe started out with Walter with his fully-functioning brain, trying to locate Olivia. Twenty years ago, Walter sent Olivia out to look for a device that would help them stop the Observers. However, on her way back to Walter she disappeared. They get to the amber where Walter last heard from her and see that the amber gypsies have been there!

“Who are the amber gypsies?” you may be asking. The amber gypsies cut people out of the amber to sell or blackmail to family members. With a little bribery– a few walnuts equal almost $3,000. Which is strange, because walnuts aren’t that great.–they find out that someone bought Olivia. It’s Edward Markham, the glasses-wearing man from our universe who owns the bookstore! Only… he’s gone a little bit crazy. Using Olivia’s ambered body as a coffee table in the apartment he never leaves. When they are leaving with Olivia’s body, the Observers come, having been warned by the walnut-owner amber gypsy. Walter is kidnapped, but everyone else gets away.

Olivia is freed from the amber and meets her daughter. We learn that because Etta’s body went missing as a three-year-old, Peter and Olivia’s marriage shattered. Olivia was much stronger than Peter, as Peter became obsessed with finding his daughter and Olivia wanted to help stop the Observers. Olivia has the device that Walter wanted. It takes jumbled up thoughts and puts them together. Before September died, he jumbled Walter’s thoughts so no other Observers could learn what his plan was.

Walter is mentally tortured by the Observers. With a little help, Etta, Peter and Olivia sneak Walter out of the testing center. After a touching reunion between Olivia and Walter, they test out the transilience thought unifier model-11, made uniquely for Walter. Unfortunately since Walter blocked the Observer from learning what his plan was, somehow also destroyed his mind.

Welcome back, our Walter, with a partly working brain and love for music. Which is how the the episode ends: Walter in a car listening to music. 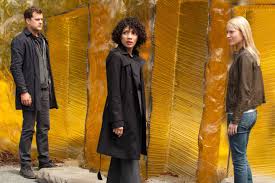 Astrid: I found these in the fridge. They’re called Egg Sticks.

Peter: My god. What is that — punishment food?

Walter: What a miserable future. Aspen, help me find my shoes. There’s no time to waste.

Walter: I still can’t believe my eyes — what you’ve grown into. Of course, you must understand for me it’s only two months ago that I took you to the pier. You loved the horses.

Etta: No. I wish I did. It’s just what they call them, right — carousels? They used to anyway.

Walter: To me, you will forever be a little girl.

Olivia: We didn’t save the world.

Peter: Not even by half. She’s still trying, though.  I never thought I’d see you again, Olivia. I know what you thought of me… when I wouldn’t leave Boston to come to New York with you… when I left you alone.

Olivia:  No, Peter, we lost our child. And… in the grief, we just… weren’t able or were incapable of — of being what we needed to be for each other. And that was all it was.

Peter: You were stronger than me. You could do something that I couldn’t do. You saw that the world needed us, and you went to help. And I just — I didn’t have the will to give up searching for this — this perfect little soul that we made. Out here for all these years… fighting for these people, defending them. And at the moment that she needed her father to protect her, I couldn’t do it. And I wanted more than anything for that not to be true. And in the state-of-mind that I was in… that meant at all costs… including us.

Captain Windmark: We have been looking for you… and your friends. I am very interested in you. I don’t know why you’re alive. Ah, you’re trying to think of music. You miss music.

Walter: There’s not a lot of it here.

Captain Windmark: We tolerate it. But it’s merely tones, rhythms, and harmonic vibrations. I don’t understand.

Walter: Mostly it amazes me. Music helps you shift perspective, to see things differently if you need to.

Captain Windmark: But there is no hope… for you. Nothing grows from scorched Earth. You seem much more interesting as a human being – than as a vegetable. But, quite frankly, all things being equal, I don’t mind which one you end up. The choice is yours.

Peter: What happened to him?

Peter: It’s always the red wire. Unless it’s the white wire. That did it. Let’s go.

Walter: I can’t do it. I can’t even recognize myself. 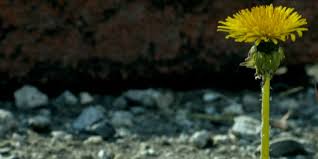 While rescuing Walter, they turned off the Observer’s CO2 machine, allowing plants to live again. Too bad it wasn’t a white tulip.