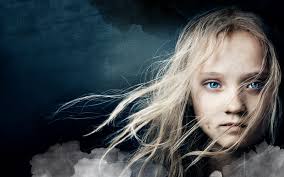 I’m going to say it straightout: I think one of the biggest problems with this movie is the demographic. Who is it supposed to appeal to? If you’ve seen the play, saying that this is a disappointment is justified and probably correct. And it is not a pleasurable experience for those to those who have never read or watched Les Mis before.

In addition, the choices made for this film are seemingly contradictory. If you want big names to boost the popularity, fine. That makes sense. But don’t expect them to sing live and sound up-to-Broadway par. Sure, they sounded okay–some sounded even good. But amazing? stellar? mindblowing? I think not. Either sing in a studio to help boost and “fluff” up the voices, or get amazing singers and record them singing live.

Plot:
From what I could tell, the plot was almost exactly the same as the play I saw. Which isn’t necessarily a bad thing–but isn’t necessarily a good thing, either. It is understandable that a play’s setting and scenery is limited; they have a small amount of space to work with, and precious seconds to change everything around. This, however, is a multi-million dollar movie. And it is quite evident that the effects of the movie were done in green screen. There were two vastly different kinds of camera work in this movie–regal, sweeping camera angles, which was the bird’s eye viewing of France, and the “two inches from the singer’s face” angle. The bird’s eye was clearly CGI–all of it. And, while pretty, was a bit jarring at times. I’m almost positive is was only used as a device to help transition the changing time periods.

I will say, that despite its ridiculous, unrealistic quality, I did like the camerawork following Jean Valjean’s ripped up letter toward France. And the battalions marching through the streets to reach the “barricade.”

A larger, more annoying problem with the camera-work can be found with the singers. Hooper–and the actors–are loving their “singing live” bit. We all know it. They’ve said it thousands of times, everywhere. But is that really something to be bragging about when it has drastically lowered the vocal qualities found in the movie? More about that later–back to the cameras. I felt no need to be that close to the actors while they were singing. Especially since that was the camera-work for easily over 75% of the movie. However, also jarring was when the actors were moving around and singing. Most of the time, the camera was very jarring and couldn’t even keep the actor’s face in the middle of the camera–or even on camera!

Two of my favorite parts in the play were translated much differently in the movie: Javert’s death, and “Empty Chairs at Empty Tables.” Javert’s death, in the play, was very impressive. As he jumped off the bridge, the ground moved up, swallowing him instead of him falling under the stage. In the movie, that was the funniest thing I have ever seen. Russell Crowe is sad, he’s standing on a bridge. Will he jump–will the jump kill him? He jumps into the shipyard, partially filled with water. But is it clear if the 300+ foot fall will kill him? We all know how implied messages are often ignored; let’s shove the answer down the audience’s throat. Cue the loudest sound of a back hitting cement and breaking I have ever heard. More realistic sound effects can be found in the Scary Movie series.

I also did not like the theme of “Russell Crowe walking on the ledge of things while half-heartedly singing.” My aunt* pointed out that at the beginning he walks confidently, unafraid of death. And at the end he tiptoes, scared, and commits suicide. While the parallels are more evident in the movie, as they have once again shoved the symbolism down your throat, it is also clear that the green screen work is exactly the same for the two parts.

And while I sincerely enjoyed “Empty Chairs at Empty Tables,” it being one of my favorite songs in the movie, a large majority of its impressiveness was lost when my brother reminded me of the scene in the play. In the play it is completely dark, with the exception of candles which are held by all of Marius’s friends, standing behind him. When the song ends, their candles are blown out and he is left alone on the stage.

Acting:
The biggest appeal, for me, was seeing the actors’ faces up close. (Sidenote: If they had panned back from the faces a bit, we still would have been able to clearly see their faces. But more about that later). When you compare professional actors to singers, or actors to Broadway members, it’s evident in the movie who came from what background. The background people, whose faces the camera did not zoom in on, were the Broadway members. I would have preferred more entire body acting rather than watching just their face. I’m not denying that Hooper did a great job of capturing the emotion on the actors’ faces while they sang and cried. But if he had stepped about ten feet back when filming the singers, he could have easily accommodated the Broadway members and “real” singers.

In no way am I denying the stellar actors’ stellar acting jobs–but let’s not get carried away and call them singers. The actors–who happened to be reasonably good at singing–included Anne Hathaway (I Dreamed A Dream), Eddie Redmayne (Empty Chairs at Empty Tables), and the cast for ABC Cafe/Red and Black.

In my opinion, this was filmed as a movie-musical, and the music was the largest component of this film–clearly it wasn’t the original plot. As such, I have a lot of things to say about Hooper’s musical choices, the changes in lyrics made, and an even closer look at the actors’ singing abilities. Because who doesn’t like bashing on the Gladiator’s singing? We are not entertained. Or, as The Onion put it, “Russell Crowe Praised For Stunning Portrayal Of Man Who Cannot Sing Or Act In ‘Les Misérables’.

This Review/Rant will continue in part two, where I will discuss musical choices, changes in lyrics and surprisingly good–and disappointingly bad–actors’ singing abilities.

*If family members show up in this post, it is because I saw it with my entire extended family. We then proceeded to break the movie apart scene by scene for the next several hours.