Empire‘s “Out, Damned Spot” was filled with bits of nostalgia, including Courtney Love’s character covering “Take Me to the River” and Lil Kim’s classic the “Jump Off” soundtracking yet another amazing Cookie moment. The best, and potentially easiest to miss, was Raven-Symoné’s return to television…as Olivia. Cosby Show fans, you’ll remember Symoné as adorable Olivia, Martin and Denise’s daughter. 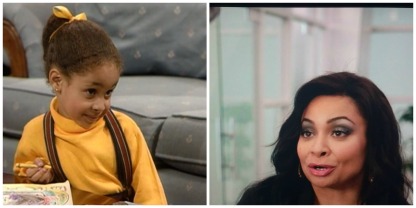 The writers clearly did that on purpose, so it’s only right that we acknowledge the name and move to focusing on what this will mean for Jamal.

the change in lucious’ look has not gone unnoticed

Aside of the general nighttime soapiness of each scene, one thing that stood out with Empire‘s first episode was Lucious’ (Terrance Howard) look. Specifically, Lucious’ perfectly coifed hair and ability to pull off satin scarves effortlessly.

Maybe the change was accidental. Maybe it was supposed to go unnoticed. Maybe it’s symbolic and denotes a shift in character development that occurred after the first episode. The most likely reason for the change? The producers simply realized that what worked for the pilot just wasn’t a good fit moving forward.

Still, it’s hard to not look at the “new” Lucious and miss the man that came before:

Although the pompadour and linens seemed slightly out of place for a show that’s otherwise very modern, we’ll miss pilot-episode Lucious and hope for a glimpse of him next season.