Previously on Sons of Anarchy: Darthy

Kurt Sutter can really write a season finale! While I’m depressed that I have to wait months for season six to start up, this was the best way for season five to end.

Predictions for Next Season:

“Maybe I’m not so different afterall.”-Jax

“You know that who ever kills me will have some serious repercussions!”-Pope

“We both know if we stay here, we’ll end up like the two people we hate the most”-Tara

Previously on Sons of Anarchy: To Thine Own Self

Only one more episode in this season! As much as I love the cliffhangers and drama that takes place in the ending of this season, I’m extremely sad to see it end until next year. With that said, another phenomenal episode!

Predictions for the Season Finale

“There will be days when you are forced to make decisions that affect the lives of everyone you love.”-Jax

“Today, I will become the man my father tried to be.”-Jax

“I stopped you from becoming the man you tried to kill.”-Bobby

“Opie was right, the gavel corrupts. You can’t sit in this chair without being a savage.”-Jax

“Revenge isn’t about the greater good, it’s a visceral need that has to be met, or the strong lose focus.”-Pope

sons of anarchy recapping: to thine own self

Previously on Sons of Anarchy: Crucifixed

The best way I can explain this episode is through one of my favorite Lord of the Rings’ quotes: “The board is set. The pieces are moving.”

Season finale is in two episodes! Will Clay finally die, or will he weasel himself out to live for another season?

“I’m tired of being crushed by greedy men who believe in nothing. I’m going to change that.”-Jax

“This Kenny G shit is giving my cancer cancer.”-Unser

There was so much development in this 90 minute episode that I sat on the edge of my seat!

Jax and the Sons

Jax has a lot on his plate. Not only is he trying to figure out a way to bring Clay down, but he’s also dealing with Juice’s fate since the revelation that he was the rat at the table, and avenging Opie’s death! Although we will never find out what Jax’s intended plans for Juice were when he followed him home–since Roosevelt was so worried he sent squad cars to his house–it’s clear Jax now has plans for the kid. Juice, who broke down and confessed his crime of killing a fellow Sons member, has the opportunity to redeem himself in the eyes of his President. Jax gives Juice the ultimatum: betray Clay’s trust and gather information on Clay’s involvement in schemes against Jax and the club, or face the table and his crime. Juice accepts Jax’s ultimatum, and begins his search into Clay’s potential hiding places. Jax informs Chibs and Bobby of Juice’s situation, and even makes the request that some laws of the club (such as it’s form of racism against joining members) be revoked.

Jax also kicked a few of his new plans into gear when he met with both Pope and mayor Hale to discuss their new partnerships. Busy lad! Pope gave Jax new intel on the person who murdered Opie, which drives Jax to seek more revenge for his fallen friend.

Jax seeks out a fellow gang/ motorcycle club on information regarding the prisoner who dealt Opie’s fatal blow. The Grim Bastards have access to the individual, but will only give him up if Jax promises to only fight him, not kill him. The Sons agree to this deal since the clubs have shared a brotherhood bond for 20 years. Upon finding the guy, the Sons chase him down, with the Grim Bastards in tow. However, Jax does not honor his promise, and has him killed. Bobby is appalled by Jax’s decision to have the man killed, while Chibs is supportive of his President. It is clear that the Sons are becoming divided again, and Jax begins to question Bobby’s role and morals as Vice President (this feels familiar, doesn’t it?)

Clay and Gemma are becoming closer–per Jax’s request of his mother. Gemma continues to visit Clay and ultimately suggests that they return to the home that they shared. In this moment, Clay confesses that he does not want Gemma to continue making contact with him unless it is genuine because he does not want to lose her again, which prompts Gemma to kiss him. I’m still not sure if Clay is truly falling in love with Gemma, or if he is playing her in order to get information to use against Jax.

However, don’t get too caught up with Clay and Gemma’s little romance, Clay is still a sneaky ape-faced dude. Clay meets with the two FBI agents who double as cartel members with information regarding the deal they have running drugs with the Sons. Romeo (played by Danny Trejo) becomes agitated with Jax’s presidency, and request that Jax be removed from the table and Clay reinstated as a way to keep their deal. Clay does not seem like a fan of the idea, but I do not entirely believe him. This could ultimately mean bad news for Jax in the upcoming episodes!

Tara believes she has succeeded in getting Otto to revoke his Rico statement. She visits him once again, and Otto has a request from her–to bring the gold crucifix that he gave to his deceased wife, Luanne, claiming he wants to pray. Tara agrees and finds the crucifix in order to seal the deal. Otto asks for a few minutes alone to pray, and to untie one of his arms so he can pray properly, which Tara agrees to do. However, Otto presses a button to summon the nurse once Tara is gone and attacks her. The nurse is stabbed to death in the neck, and Otto is apprehended. He screams at Tara “The Sons live, but Redwood bleeds!” Otto has set up Tara as an accessory to murder, and the investigators will now have Tara’s background information with the Sons, which will ultimately cause more legal issues for the club and for Jax.

“Do you believe in God?”-Otto
“I…think so?”-Tara
“That’s not believing, Doc, that’s covering your ass in case there is a Rapture.”-Otto

“Jax, you just shit on two decade of brotherhood, what you did was wrong.”-Bobby
“Maybe it was wrong, but you didn’t see the look of pleasure on that animal’s face when he beat my friend down!”-Jax

“Out with the new, in with the old.”-Romeo

Previously on Sons of Anarchy: Ablation

Jax is extremely close to figuring out who is the rat at his table, and how to overthrow the ape-faced Clay. He only needs one person..

Since the kidnapping of Chibs and the revelation that the nomads were the muscle behind the home invasions, SAMCRO is keen on bringing them to (their type) of justice. Bringing Frankie Diamond’s fate to the table, the Sons of Anarchy unanimously decide that upon finding Frankie, they will strip him of his patch, and then kill him. However, after the meeting, Jax takes his Vice President, Bobby, aside and clues him in on his own intricate plan. Jax has decided that once Frankie is found, he and Bobby will volunteer to kill him, but will take him somewhere remote where they can make an even trade with sheriff Eli Roosevelt. Jax will be killing two birds with one stone: ensuring Frankie will get the morbid justice he deserves, while also getting the rat at his table. Jax and the crew get a lead on Frankie (who is hiding out in south Lake Tahoe) but has also obtained mob protection from SAMCRO. The Sons then go on a ride to find Frankie. 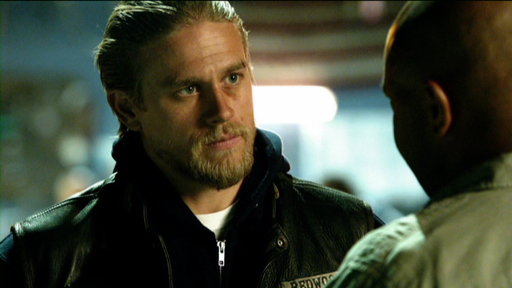 During the ride, Clay’s osteoarthritis acts up, and he cannot ride his motorcycle. Oh, but don’t think Clay unintentionally forget his meds. Clay, who has received outside information of Frankie Diamond’s hideout, convinces Juice to drive him to the hideout without Jax, probably to get to Frankie before Jax does. At this point, Jax and the rest of the Sons arrive at the Poker House where they believe the man who is hiding Frankie resides. After a quick (and necessary) fist fight between the Sons and the Mob, Jax convinces the leader, Leo,that Frankie has much more money than he claimed, and that this will result in a retaliation from the Cartel and from outside gangs. Leo remains skeptical of Jax’s claims, but takes him to Frankie anyway. While this is all happening, Frankie receives news that the Sons are after him, and in a panic, shoots his lookout and attempts to escape BUT NOT BEFORE CLAY ARRIVES. However, Clay cannot extract his homicidal maniac actions before Jax shows up with Leo, and Leo shoots rashly shoots Frankie upon his discovery.

After this rash action by Leo, Jax takes the dead Frankie to Eli Roosevelt anyway. Although it is not the exchange Eli wanted, he still tells Jax that Juice was the rat at the table (although Jax had already basically figured it out anyway). However, Eli defends Juice’s choice. Jax then stalks Juice, and it is undetermined what will happen next (until next week!)

Tara continues her task with Otto. It appears she has convinced him to recount his statement for the Rico case by bringing his deceased wife’s perfume in and getting Otto to remember what he loves most. The only obstacle that can possibly happen with her meetings with Otto is that her boss, Margaret (played by McNally Sagal) changed Tara’s insurance to married. This could potentially hamper her meeting to the prison because her insurance could reveal ties to the Sons of Anarchy.

As all this is going on, Gemma and Nero are becoming closer, even though Gemma knows she must rekindle her relationship with Clay in order to win Jax’s family back. Nero and Gemma enjoy a lovely day together, meeting Nero’s son and taking Carla’s ashes to a crypt. It’s sad to watch Gemma become a lighthearted person and yet we know it will not last. Gemma reluctantly meets up with Clay and begins to perform her duties as spy and lover. Gemma seeks out Jax and Tara, to make sure that what she is doing with Clay is real and will ensure that she will get her family back. Gemma informs Jax that she is the most happiest with Nero, but that she will sacrifice that happiness in order to get that family back. It’s almost sad to watch her silently suffer, but she screwed up big time with that accident, so this is a consequence (albeit, a little bit harsh).

Next week, we get a 90 minute episode! Whoo Hoo!

“You haven’t said much since your boy was here.”-Nero

“All in favor of Frankie Diamonds meeting mister mayhem, yay or nay?”-Jax

“I really hope you’re as smart as you think you are.”-Bobby