“I should also warn you guys that my mom is a little bit perky.” – Jess
“Wait, you think she’s perky?” – Winston
“Well, she doesn’t have my dark side; I got that from my dad.” – Jess

“Let’s just say that my cousin doesn’t exactly have the most sophisticated palette. Raised by wolf-like parents in the wilds of Minnesota, he actually went to juvie for stealing the synagogue’s minivan. He’s been that way since we were kids. Made my life a living hell.” – Schmidt

“I thought everyone knew. You grieved so publicly on Instagram, all those pictures of sad trees and your lunches.” – Jess

“A parent trap takes weeks of scheduling, I feel like you’re just throwing this together. This is a makeshift parent trap, probably won’t work.” – Nick

“Why do you have to ruin everything?” – Jess

“I don’t know! I’ve got something bad inside me, I ruin things…let’s do this parent trap.”-  Nick

“So your hair just does like this one thing, right?” – Jess

“Seems to me like this whole things is a draw. I mean, you did touch a hotter pan, but he ate a much bigger candle. I mean, you belched longer, but he farted louder. You punched a tree, he headbutted a bench. You both bailed on the fifth testicle punch. I mean, Schmidt, how much more can you take?” – Winston

“Know this, your caveman ideas about manhood are so over. Manhood today is about exfoliation, cheese courses, emotional honesty, and Paxil. And yes, cutting peppers in the classic style de Julienne. You may have bested me in the competition of pre-Clinton manhood but I am Schmidt, a refined and enlightened pescatarian, 90% of the time.” – Schmidt

“You’re getting your scent all over my pillow. It took me months to get rid of that heavenly curry smell. – Schmidt

“We sold our qualms. We used the profits to buy perfect bodies.” – Schmidt

“This is some watered-down nonsense! You’re some no good shysters!” – Young Nick

“He’s like a character in a Judy Blume novel.” – Schmidt

“Why are you cradling me like a baby, friend? This is not how guys of my generation hang out.” – Nick

“Look. I’m a depraved freak, and I want to wander into your Narnia of sexual terror and emerge like a freshly birthed calf.” – Schmidt 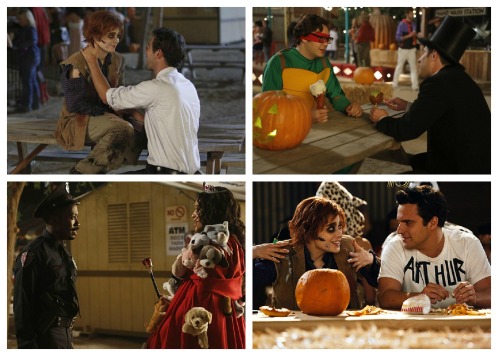 “Nick, where do you even buy sheets like this? They have the thread count of a paper towel.” – Schmidt

“I got it, you look like a zombie Woody Allen. These brains are terrible and such small portions.” – Schmidt
“On Christmas, I like to eat Chinese people’s brains, they are the only ones that are open.” – Nick
“Zombie Christina Barcelona.” – Jess
“Yeah, I have nothing to add to this.” – Winston

“I couldn’t afford my therapist, so I ate his brains. Marx Brothers.” – Winston
::claps::
“That’s the one.” – Schmidt

“Nice kid, but she can’t draw for crap. I mean she just traced Bugs Bunny.” – Sam

“Wow, Schmidt, you’ve got so many boots.” – Winston
“You know who doesn’t have a lot of boots? Guys who aren’t getting laid on the reg’.” – Schmidt

“You’re going as young Abraham Lincoln for Halloween? – Winston
“Statistically speaking, every American thinks about Abraham Lincoln at least once a day, and CeCe’s American, so…”- Schmidt

“What are we looking at here Robbie? Man-to-man, you didn’t want to wear something…I don’t know, a little more form-flattering? I mean, like a pile of towels? The number eight?” – Schmidt

“Just, uh, keep the pumpkins away from me. OK? I kind of cut myself last Halloween. I mean, not on a knife, I cut myself on the pumpkin.” – Robbie

“I’m ‘raining cats and dogs’, get it? Reigning, cats and dogs.” – Shelby
“Those stuffed animals are gonna look good on the floor of my bedroom.” – Winston

“You want to know why I don’t like haunted houses? Because they’re just like relationships. You walk in all confident, and then once you get in it’s not what you thought it was going to be, and it’s scary.” – Nick

“Those costumes are for Purim!” – Schmidt

“Do you love your life? Because I’ll tell ya, diabetes doesn’t.” – Schmidt

“Why do you have a mustache glued on top of your mustache?” – Shelby

“Plan B was always Matthew McConaughey in Magic Mike.” – Schmidt

“I so excited. I shake this thing that my momma gave me. Yolo.” – Nadia, who doesn’t know what Wilmer Valderrama looks like

“I’m going out tonight with CeCe and her model friends, and I’m going for promising ballerina turned streetwalker.” – Jess
“You have too much joie de vivre. OK? You want to look a little more bored. Tired. Just altogether disengaged.” – Schmidt
“More tired. More sick like. Really let your bones prop you up.” – Winston

“…I should be able to deal with the fact that they think I look like a monkey…from a Russian cracker ad.” – Jess
———-
“The only time a man is allowed to think about another man is when that man is Jay Cutler.” – Nick
———-
“If I could give you that cookie back, I would. Nothing would make me happier than to throw it up, mash it into cookie shape and shove it down your throat.” – Nick
“You wanna momma bird me the cookie?!” – Schmidt
———-
“You realize I say goodnight to you every night and you never say good night back? What is the problem Nick? Do you not want me to have a good night?” – Winston
“I can’t go around saying good night to everyone and buying people cookies. I am not a titan of finance sir.” – Nick
———-
“What’s going on? Did you guys watch porn together again? Why do you keep doing that? It’s always awkward!” – Jess
———-
“You can’t say ‘butt drinking’ and then not explain what it is. It has two of my four favorite things!” – Nick
———-
“Well Nick, I’m out of tears. Plumb out. All that’s left is just yellowish good. That’s right Nick, goo.” – Schmidt
———-

“Brian Austin Green.” – Schmidt
———-
Also, hearing Hall and Oates’ You Make My Dreams Come True play during the Ford presentation reminded me of (500) Days of Summer, then I thought of Summer, which led me to hate Zooey Deschanel for the rest of the episode.