thoughts on house of cards: episodes 1-4

Kevin Spacey wants to rule the world, and we humble mortals better get out of his way. The veteran actor joins an all-star cast in House of Cards, the atmospheric political thriller set to turn White House politics on its devious, manipulative head. Armed with the freedom of paid cable networks and the pedigree of Oscar nominees behind and before the camera, this show somehow manages to be as intellectual as it is hip. It’s an edgy, moody story with ambitions overshadowed only by the ones held by its ruthless protagonist.

House of Cards wastes no time in establishing its deceptively simple storyline: Francis “Frank” Underwood (Spacey) wants to dismantle and destroy the current presidential administration. This familiar plot of revenge is revitalized by Underwood himself, a charismatic, dangerously intelligent politician with a disarming Southern drawl. His near maniacal grip on vengeance is tempered by his wife’s serenely cool, but equally determined drive. Robin Wright gives Claire Underwood a blend of grace and understated ruthlessness rarely seen. It’s clear Frank and Claire were meant for each other, two star-crossed lovers who see one another’s sense of purpose reflected in the other. These two could have ruled a small continent back in the Middle Ages. Instead, they have their sights set on Capitol Hill.

Surrounding the Underwoods, is a cast of pawns. Frank handily picks up two lackeys on his quest for political domination: Zoe Barnes, a sexualized twist on the plucky girl reporter (played by Rooney Mara‘s sister, Kate Mara), and Pete Russo, a Congressman with an easily blackmail-able history of drug use and prostitution. Meanwhile, both Claire and Frank alternate interactions with Remy, a deep-pocketed lobbyist who trades funding for favors. What quickly becomes apparent is everyone has an agenda. In Frank’s world, you succeed by understanding these agendas – and then exploiting them to promote your own. Part of the fun of the show is watching how easy Frank makes this all look. 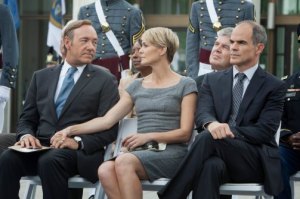 The first four episodes of House of Cards are exquisite, but they also feel like warm-up drills for an athlete before the actual game. Frank is setting things in motion and taking out minor players like regular people sweep out the trash. It almost feels…reflexive. Frank is merely reacting to betrayal: the intellectual equivalent of a hot-headed man’s resort to his fists. He leaves a wake of disgraced Congressmen in his path as well as decisively eliminating the Secretary of State and House Majority Leader by the end of episode four. If the show can deliver on the promise of these early episodes, then it’s set for a meteoric season arc. The potential of House of Cards is seemingly limitless, thanks to Frank’s incalculable drive and ambition. Would Frank be satisfied by merely take out the president or would he want to sit in the Oval Office himself? Is Frank the sort of man who would ever be satisfied with anything? For the sake of this show, hopefully not. 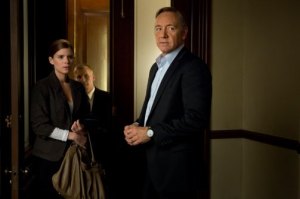 The most shocking element of House of Cards has nothing to do with the story (or the language or the sexual content). The first season of the show premiered – in its entirety – on February 1, 2013 at midnight. As if that wasn’t revolutionizing enough, the episodes are only available on Netflix. While making shows for the internet isn’t a new concept, the scale, scope and talent have arguably never even come close to House of Cards. And with Netflix set to exclusively release fourteen episodes of Arrested Development this May, the media company is poised to become a major player in television production.

There are some movies made based on TV shows (i.e., Dukes of Hazzard) that have long since gone off the air. While others are made as a continuation (i.e., Firefly’s Serenity) on the series finale or to answer questions that were brought up since the shows cancellation/end.

The shows most likely to make it to the big screen are those that the studio execs believe will make them money (that’s the only reasonable explanation for Sex and the City 2), whether at the box office or through subsequent DVD sales (never underestimate the spending power of a small, but loyal fan base).

Not all TV shows get this kind of fanfare ending, but that doesn’t mean they shouldn’t. This list is probably missing a few shows, but they’re the ones I feel are most deserving.

(If for some reason you’ve never seen these shows…no judgement….but please rectify that ASAP.)

Shortly after this show (prematurely) ended, there were talks that a movie wasn’t far behind. The CW foolishly cancelled Veronica Mars in 2007 and for two full years I held onto the hope that we’d see Veronica in the FBI, back together with Logan and carrying on a long-distance friendship with Wallace. Sadly, a Veronica Mars movie will not be happening. Kristin Bell is a big enough star now where the idea may be revisited, but unless there’s a surge in DVD purchases or a massive push by the fans it’s unlikely. And mildly depressing.

Jason Bateman comes second only to Vince Vaughn on my imaginary list of favorite comedic straight men. But he’s not the only reason I started watching this show (a few years after it was cancelled…shame on me). The show is just hilarious and memorable. This is another instance where a movie has been discussed without anything outside of a script coming into fruition…yet. I’m still holding out hope for seeing Arrested Development on the big screen. It had a relatively satisfying ending, but with the Bluth family, there would be more than enough material to hold my attention for 1.5+ hours.

Starz is not wildly known for its original programming (outside of Spartacus), which should be the only reason ratings were so low for this wildly unappreciated comedy. Another Rob Thomas creation (the man is a GENIUS), the show centers on a group of out-of-work actors who are employed at catering company. They hate their jobs and make no apologies about wanting to be anywhere other than whatever event they’re catering that week, which usually makes for a funny/sad combo. I know hoping for a movie ending to this show is the sort of blind naiveté that made me hope for a third season…but still, it was cancelled too soon and I still haven’t had time to process.