Django Unchained is a brash film that tackles pre-Civil War America in all its racist, ridiculous, and blood-soaked glory. This film, it almost goes without saying, is not for everyone. The humor ranges from sweet to downright disgusting, and the violence starts out strong and escalates to a volatile finish. That being said, if you love Tarantino, you’ll love this. It’s bold done right – in-your-face storytelling that revels in the knowledge that boundaries are meant to be stepped on, laughed at, and ultimately, obliterated. 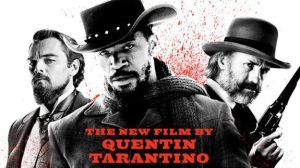 This wild ride revolves around the partnership between Django and Dr. King Schultz, an enterprising German expatriate. In three sweeping acts, Tarantino takes moviegoers through Django’s transformative journey from enslaved bounty hunter to masquerading Mandingo buyer to victorious angel of vengeance. Dr. Schultz is, for most of the movie, Django’s Virgil, leading and even enabling the lost man through the circles of white supremacist hell. At its heart, this film is really about Django’s quest to be reunited with his wife, a slave sold to the deliciously villainous Calvin Candie. However, oddly enough, that storyline turns out to be the least compelling, a fragile frame upon which the characters and side stories of a far more intriguing nature can be displayed. Not that it really matters. By the time Django seizes his revenge – out of a pile of dead bodies – all minor complaints are cast aside by the cleansing force that only a good shoot’-em-up finale can deliver.

Chances of Django riding away with Oscar gold this February? Pretty low. The violent masterpiece is already steeped in multiple racial and gun control controversies, but the real truth is that this just isn’t the Academy’s usual cup of tea. With Daniel Day Lewis method-acting his way through Lincoln and American heroes taking out Bin Laden over in Zero Dark Thirty, there isn’t a lot of room for this bloody film that amuses as often as it horrifies. Really though, as cliché as it sounds, it is an honor just to be nominated. The Academy has never been the biggest fan of Tarantino, but it still recognizes his talent…albeit at a conservative trickle. (Though it’s worthy of note that Tarantino did at least take home an Oscar for Best Original Screenplay for Pulp Fiction.)

On the other hand, the Academy already loves Waltz: they gave him the same award he’s nominated for now just four years ago. However, that role was a bit meatier and nastier. It would be hard for anyone to out act Waltz as Nazi nightmare Colonel Hans Landau– even Waltz himself. He certainly puts his all into Dr. Schultz, but Schultz – bless his heart – can’t hold a candle to Landau.

I suppose someone – not me – could make a case that Jamie Foxx deserves a nomination. Personally, I found his portrayal of the titular character merely suitable; it never seemed to move beyond a straight interpretation of a phenomenal script. The lack of nominations for those listed above is a different story. No one directs like Tarantino, and yet the man is still without a directing Oscar. I would have been happy if either DiCaprio or Jackson nabbed a nomination, but only awarding Waltz with the honor makes little sense after actually watching the movie. Once the story moves to its hearty middle, Waltz all but disappears under the stunning force and personality of Candie and his manservant Stephens, played by Jackson. (And not to gripe, but how did Alan Arkin beat out both these men to receive a nomination? I loved Arkin’s turn in Argo – another great movie of 2013 – but his character hardly makes a blip on my radar compared to the craters created by the denizens of Candieland.)