Previously on Revolution: No Quarter

There are only two ways to watch Revolution: with other people as you laugh and cackle at the bizarre dialogue, “retro violence”, and sea of scowling faces; or alone, like me, drowning your gripes and surprising outbursts of emotion in a bowl of melting ice cream.

Last night’s episode was weird, okay? I don’t know if I’d go as far to say it was good, but it successfully achieved . . . something.

Charlie, Miles and Nora reunite with Maggie and Aaron. We find out that Uncle Miles is planning on leaving Charlie (just like everyone else in her life . . .) and that after the blackout Maggie tried really, really hard to get back to orphaned England and her jolly good kids (or maybe it was the other way around).

A crazy person with a hastily sketched out personality – that largely revolves around his aforementioned craziness – sets his (plague?) dogs on our semi-likeable band of heroes, severs an artery in Maggie’s leg, and kidnaps Charlie. Miles and not-Nate (oh yeah, he’s back) save the day by killing the crazy person. They release Charlie before returning to the rest of the group in time to be with Maggie as she dies.

Meanwhile, through a tornado-assisted miracle, Danny escapes the clutches of the Monroe militia. Then, through an idiotically misguided act of kindness, Danny is recaptured.

I was kind of bored for awhile. Rabid dogs, crazy guy, attractive people fighting and scowling — how could this be boring? I don’t know . . .  Maybe because we keep delving into poorly realized character development. Like Charlie and her abandonment issues. Or Nora and her feelings or non-feelings for her former flame Miles.  Maybe I like The Walking Dead so much because zombies appear and bite someone’s throat out whenever the awkward character dynamics threaten to get out of hand.

Where did we go in this episode? Absolutely nowhere (except that we’re down one blond British lady). So Miles isn’t going to leave Charlie. Big whoop, I didn’t even realize that was a possibility till the first five minutes of this episode. Danny has neither risen nor fallen in my estimations – he did exactly what I expected of him (which led him absolutely nowhere as usual). Gah, let’s go somewhere, guys! We have the whole planet to explore, infinite relationships and moral intricacies to create and examine! And instead we’re still tripping around the backwater edges of some eastern state waiting for crazy people and their dogs to capture us.

Here’s the weird thing: the last twenty minutes kind of worked for me. I know it was burdened with the same clunky plotting and silly exchanges – and maybe the late hour was enough to mellow my overly critical brain to a pile of mush – but things started clicking. I mean, come on: Maggie giving up on finding her children and resorting to suicide? That was pretty sad. Not-Nate heroically joining Miles to rescue Charlie? That was sort of romantic (even though I wish their relationship was built on more than a random water meeting). Rachel leaving her children to turn herself in to her husband’s brother? Hmm that’s kind of intriguing. Touché, Revolution. I guess I’ll be back next week. 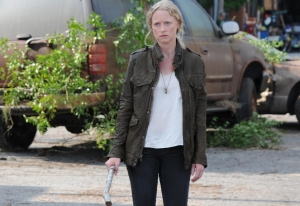 Hey 18-49 year olds, what are you watching on Monday nights? According to the completely reliable Nielson ratings, you’re watching Revolution! Up against Hawaii 5-0 and Castle, my little pseudo-post-apocalyptic mutt is actually dominating. Take that, crime.