doctor who recapping: dinosaurs on a spaceship

Previously on Doctor Who: The Asylum of the Daleks

Yeah, that’s right, every other show ever – can you have an episode dedicated to dinosaurs traipsing around where they don’t belong? I didn’t think so.

(And no, Terra Nova and Dinotopia, you guys don’t count. You have to be good to count.) 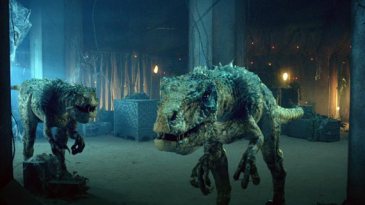 Queen Nefertiti: You remember your history lessons right? Ancient Egypt once had this pretty swanky queen who knew English idioms and liked to wear incredibly low-cut dresses. Or something like that.
John Riddell: Indiana Jones-esque and equipped with a barrel full of double entendres, Riddell gets picked up by the Doctor because someone on the show needs to know how to use a gun.
“The Ponds”: Amy and Rory are accidentally joined by Rory’s father, Brian! Befuddled hilarity and surprisingly touching moments ensue. 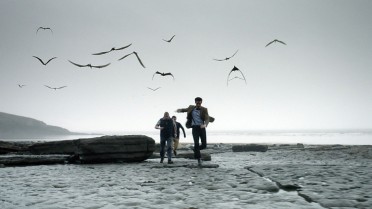 Man, I love this show. This episode wasn’t even that spectacular from a critical perspective (or even a logical one), but I’ve long given up judging Doctor Who on an episode-by-episode basis. For me, the essence of this show resides in its ability to encourage imaginative story-telling and push the boundaries of what television programs ought to be. I cannot stress how much I loathe procedurals. Especially procedurals lazily disguised as something else. It’s refreshing to watch shows that plummet along on their own quirky and clunky arcs. There are bumps in the road, sure, but I’ll weather them out. For every so-called “filler episode”, there’s a Weeping Angel right around the corner.

I’ll try and keep this short since it’s an unintentional continuation of last week’s morality rant. So the Doctor has absolutely no qualms about allowing the ISIS missiles to kill Solomon and his robots. Really? I’m all for the utilitarian and eye-for-an-eye justifications, but not when employed by a character who has a 900+ year legacy of doing the opposite. Come on, Moffat. Help me out here. “In Moffat We Trust” is a popular Whovian mantra, but for now I’m more preoccupied with Moffat Who Forgets Who His Main Character Is.

Three episodes left and counting before the undeniable end of the Pond companion era. It almost goes without saying that Amy and Rory’s good-bye will be a dramatic, possibly fatal affair. No hints yet about their future demise or peaceful relocation, but plenty of grim foreshadowing is starting to pile up. When the Doctor cheerfully tells Amy she’ll be around till the end of him, her reply – “Or vice versa!” – paired with the Doctor’s suddenly drained features, isn’t difficult to analyze.

The Doctor: Brian Pond, you are delicious.

The Doctor: Of course you are!

The Doctor: How do you start a triceratops?

The Doctor: We need to turn this ship around

Rory: You said it was too late, that there wasn’t any time.

The Doctor: Ah, but I didn’t have this plan then, did I?

The Doctor: Look, Solomon. The missiles. See them shine? See how valuable they are? And they’re all yours. Enjoy your bounty.