Previously on The Walking Dead: Seed

Time is running out; Hershel is bleeding out and has lost consciousness after his attack and amputation. The surviving prisoners that were revealed in the season premiere could either be an asset or a threat to the group, and Rick must continue to make his lone judgments for the group as he continues his reign as leader.

The five surviving prisoners–a mixed group of threatening looking hoodlums–follow Rick and the group out of the cafeteria after their revelation. They are initially hostile towards the group, and vice versa, as they make their arguments over who claims ownership of the prison. After a brief standoff, the prisoners begin to tell their story. For the past 294 days, they have been locked inside the cafeteria after a riot broke out on the prison yard that left a majority of inmates and guards dead or zombified. They are oblivious to the true devastation of the outbreak and are shocked when Rick enlightens them by taking them outside of the prison and into the yard where they are immediately confronted by zombies. After another heated argument over the ownership of the prison, Rick and the leader, Tomas (played by Nick Gomez) come to an agreement: Rick and his group will remain in their current cell block, and Tomas and his crew will reside in a cleared out cell block under the condition that they will stay away from Rick’s group.

Hershel’s life is hanging by a thread. Carol and Lori have managed to stop the bleeding and no fever has appeared, but they remain worried over his slowing pulse and labored breathing. Glen and Beth manage to keep hopeful thoughts of his recovery–with Beth even cutting Hershel’s pant leg so he can move around comfortably–while Maggie keeps a realistic perspective on her father’s condition. Maggie tells her father that she does not want him to fight for his life anymore and that she wants him to be at peace.  Carol, who has become the second in command caregiver, realizes that in the event of Hershel’s death, she will need more medical practice for when Lori’s baby is ready to be birthed. She ultimately sets out to practice on Zombie cadavers so she will be ready for when the time comes.

Rick is conflicted over the prisoners. However, he, along with Daryl, and T-Dawg, sets out to teach the prisoners how to kill zombies. When confronted, the prisoners ambush the zombies with such brutal violence and ferocity that it is almost comical. After some time, they teach them to kill zombies in a clean manner without the “prison riot crap”–going for the brains (an obvious homage to every classic zombie movie). However one prisoner, Oscar, is scratched by a zombie. Rick debates putting Oscar into quarantine when Tomas immediately murders Oscar in what can only be described as “prison riot crap.”

Rick finds a cell to clear out for the prisoners. During the skirmish with the zombies, Tomas makes the sketchy decision to throw a zombie on top of Rick. Daryl manages to (always) kill the zombie just in time. Tomas claims the zombie was “coming at me, bro”. Of Course, Rick doesn’t take crap from anyone, and in all rationality, makes his decision about the prisoners. Rick throws a machete at Tomas’ head and locks Andrew outside with a hoard of zombies. After talking with the two surviving members, Axel (played by Lew Temple) and Oscar (played by Vincent M. Ward), Rick decides to let them live in the cell block from the original agreement.

Hershel stops breathing! But, with the quick thinking of Lori (who finally did something useful), is revived with CPR. Herhsel finally wakes up and we are left relieved and wondering how this will impact the group.

“You got a cell phone so I can call my family?”-Oscar
“You really don’t get it, do you?”-Rick

“Aint no way that Robin Hood cat is responsible for killing all these bodies.”- Tomas

“You’ve got to be worried sick about delivering the baby.”-Carol
“Look at me, do I look worried?”- Lori
“You look disgusting.”-Carol

“Remember to go for the brain.”-Rick

Previously on The Walking Dead: Beside the Dying Fire

It’s officially Halloween season, and what could possibly be a better way to ring in the creepy season than with The Walking Dead premiere! The season premiere started off just as strongly as season two ended, with lots of blood, gore, a very pregnant Lori, and a “Ricktatorship”.

We meet the group after several months of battling it out and moving from zombie infested house to another zombie infested house. The men of the group search feverishly for a safe haven, one that would be suitable for Lori to give birth. Carl has seemingly lost his innocence as his father brings him along with the other men of the group, killing zombies with incredible accuracy. Rick has become extremely hostile and agitated as he becomes the supreme leader after the questioning of his leadership in the season finale. However, it seems the group has learned its lesson about “fight or flight” because once zombies begin to show up, the group makes a run for it, likely due to the shortage of ammunition. After an implied long and extensive search, Daryl and Rick discover a possible safe haven: a heavily protected prison.
Rick reports his findings to the rest of the group. They seem somewhat hesitant and weary after searching. Rick explains to them that the prison is the perfect haven: the zombified prisoners are easy targets as they cannot escape the prison and can be killed with relative ease through the fences, as well as the food, ammunition, medicine and rooms (i.e. prison cells) where the coupling group members can shack up! After a cozy night of camp fire songs, roasted owl and a revival of faith in Rick’s leadership, the able bodied group members take on the prison zombies.

Although it is easy to kill zombies with a sharpened stick through the fence, zombies in riot gear prove to be quite the challenge. After the successful attack (and a gory detailed removal of a riot guard’s face) Rick and his fellow zombie killers infiltrate the prison. It is revealed that there are a few dead civilians in the prison, and zombies shot within the prison, which hints that the prison has been a refuge for people like Rick before. 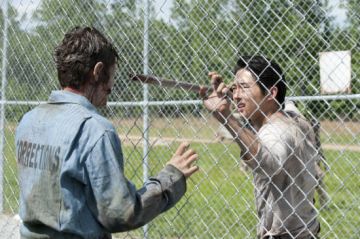 Andrea has been working with the bad ass zombie killer, Michonne (played by Danai Gurira, viewers may know her from The Visitor) as they search for a safe haven as well. Michonne, who wanders around with two limbless zombies chained to her, has recruited Andrea as a sort of apprentice.

While in the prison, the group begins to make the place homey and search around for remaining zombies and uncover the valuables that the prison has to offer. Tensions have grown between Lori and Rick. Lori summons Hershel to her cell and unleashes her doubts and worries about her unborn child. Lori is afraid that she has lost the baby and that it is dead inside her, ultimately becoming a zombie that could potentially rip her apart from the inside out. Lori further reveals to Hershel that if she dies during childbirth, they are not to hesitate to kill her, as she does not want to return as a zombie and harm the group (her first selfless decision since the beginning of the series…)

Rick, Daryl, T-Dawg, Glen, Hershel and Maggie explore the prison, where they encounter a hoard of hungry and angry walkers. During the chaos and confusion, Maggie and Glen become separated from the group. Hershel passes by a seemingly dead walker–and is surprisingly bitten in the leg! In an effort to keep Hershel alive, Rick cuts of Hershel’s leg with a hatchet (a graphic scene which can only be rivaled by the prisoner in Saw hacking off his foot in an effort to survive). The episode ends after the amputation with Rick spotting a group of alive prisoners behind glass in another room.

PREDICTIONS FOR THE SEASON:
QUOTES:
“I’ll admit, he’s gotten us further than I would have thought. Shane wouldn’t have been able to get us this far.”- Carol
“This was a great win, but we need to push a little bit more.”-Rick
“What do you think?”-Rick
“Home, sweet home.”-Glen