I increasingly feel like Revolution is focusing on the wrong part of a very intriguing story. It’s analogous, in my brain, to a show featuring the mildly thrilling adventures of Samwise Gamgee’s teenage kids instead of . . . well, you know. I get that flashbacks should be compelling, but when the flashbacks themselves begin to eclipse the entire show, I think we might have a problem. 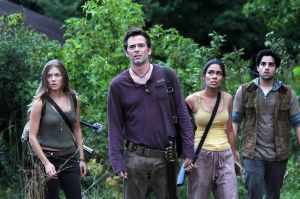 Nora introduces Miles and an eternally bland Charlie to the resistance – a ragtag group lead by a morally confusing priest. The militia finds them, but Nora’s sniper rifle from the previous episode gives the resistance a slight advantage. Somehow Jeremy, the leader of this batch of Monroe’s men, gets captured and reveals a “shocking” secret: Miles helped start the Monroe Republic. Miles turns himself in to Jeremy and the militia, but Nora explodes a bridge and Charlie shoots a bag from 10,000 meters away (or something like that) to help him escape.

Meanwhile, Maggie and Aaron arrive at Grace’s house too late. The house is empty, but both of their spidey senses tell them that something “very bad” happened there. Aaron complains about being a billionaire and then losing all his money when the world lost electricity. Suddenly, Ben’s necklace turns on, and Grace’s house has electricity for about ten seconds.

In flashbacks, we follow Miles and Bass (aka soon-to-be-super-evil Sebastian Monroe) in the weeks and months immediately following the blackout. The two military buds are on their way to Chicago to reunite with Miles’ brother Ben. Through their eyes, we see the lawlessness and utter deprivation of humanity that reigns in the wake of the blackout. When they come across two men beating up Jeremy for his money, Miles surprises Bass by coldly killing both of the attackers.

So I like my science-fiction heavy with moral dilemmas and conundrums. Revolution has been teasing me with slight nibbles of such wonders – amongst a larger batch of nonsense. However, I was pleasantly surprised when Flashback Miles killed both of Jeremy’s assailants. It demonstrates a dangerous streak of utilitarianism that I heartily appreciate. Maximizing the good doesn’t always mean maximizing life, as the John Stuart Mill that lives in my head would say (I’m allowed to wax poetic about philosophy every now and then, okay?) Now all we need is a stark Kantian advocate. I was rooting for the priest, but he’s kind of weird. I don’t understand his religious or moral stance on forgiveness, especially considering Miles is technically a criminal against neither God nor country.

I honestly can’t decide how I feel about this show. It’s clearly ridiculous, but at the same time, it’s gradually pushing the boundaries of conventional action shows and presenting an increasingly complex story. I’m imagining there’s this one guy in the writer’s room who has this phenomenal idea in his head, but everyone around him keeps making little changes and adjustments. Just let him work! I need this show to reach its full potential – at least until The Walking Dead returns in two weeks and I can get my fill of excellent post-apocalypse fair.

At its worst moments, Revolution at least makes me laugh. The character development is halting, and almost every scene of exposition is hilariously painful. Poor Nora and Charlie might actually be played by competent actresses, but the lines these girls are forced to utter (to presumably reveal more about their complex characters) are just silly. At least, they get a leg up in the wardrobe, hair and makeup, and butt-kicking department. 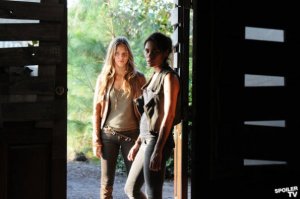 NBC has picked up Revolution for a full season!

This may have been inevitable, but I find myself – slightly against my will – liking Revolution more and more. Sword fights, faked deaths, ethical justifications, and a wrist gun? My poor brain can’t resist. 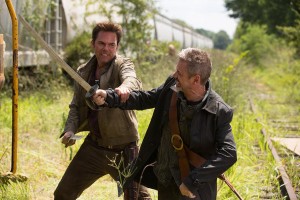 So let’s get something out of the way: Danny is an idiot. Last week, I compared Danny to a llama, but that’s unfair to llamas. Llamas at least know how to stay silent. Why does this guy keep talking? He practically got his father killed because of his big mouth (and quivering crossbow), and now he taunts his captor as a morally misaligned murderer? You know something funny about morally misaligned murderers? They’re not that forgiving to mop-topped young brats with an apparent death wish. This isn’t the actor’s fault, I should add – and maybe it’s actually no one’s fault. I just think that since a lot of this show currently hinges on rescuing this silly guy it would be nice to make him slightly more appealing . . . or intelligent.

Oh, J.J. Abrams, I’ll follow you wherever you lead – even though all that usually gets me is a closet full of Rambaldi junk and a forgotten smoke monster. I’m genuinely hopeful for the direction of this show, and I’m especially looking forward to further intrigue surrounding Monroe, Rachel, and the resistance. I think Rachel, in particular, adds a lot to the show’s ensemble. She’s already been given more depth than characters with triple her screen time and it doesn’t hurt that she has some proven acting chops. Monroe seems suitably intriguing and complex, as does his obedient henchmen and the mysterious members of the resistance. If Abrams can resist his trademark slant toward the supernatural, I think we’ll be all set for a fantastical and character-driven adventure.

Complaining (Or a surprising lack thereof)

I have nothing to really complain about this episode (though I did watch it at 6 a.m. this morning in a groggy, pre-coffee haze). Sure, I find Charlie’s perpetual frown and dopey repetitiveness a bit grating (“So you’re militia”?) and I already complained about her unlikeable brother, but that’s nitpicking and I know it. I generally just enjoyed watching the characters prance around and slash each other with swords. It’s fast-paced, somewhat intelligent, and overall intriguing story-telling. It’s not perfect, okay – I get that. But in a sea of nauseating network sitcoms and been-there-done-that drama programs, Revolution offers something refreshingly different and I heartily appreciate that.

No cancellation rumors! And the preview for next week features a former BSG cylon. It’s like this show is consciously trying to to lure me in – and it might be working.