Previously on AHS: The Origins of Monstrosity 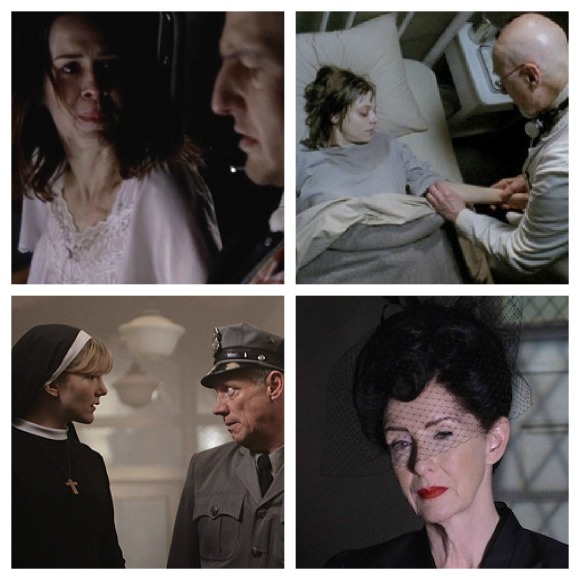 The Kiss of Death

Miles, a patient at Briarcliff, is having a battle royale with the voices in his head (“Somebody’s got to be the hero, so why not you?”), which prompts him to slice his own wrists. His suicide attempt fails and when Sister Eunice comes to check on the hoopla, she sees some ancient Aramaic written on the wall in his blood. She assumes Miles has summoned Shachath (the Angel of Death). Although the thing that inhabits Sister Eunice appears uneasy with the arrival of its “dark cousin”, the Angel is neutral and doesn’t seem like much of a threat.

Several of the ladies had brushes with death, but ultimately Grace was the only one who died. It wasn’t the alien invasion, which ripped out her lady parts, but the bullet shot by Frank the guard. Grace was given just enough time to save Kit before she received her kiss of death and left this season’s horror story.

The Saga of Sister Jude

Missy Stone isn’t dead, which means Sister Jude spent all that time with a heavy soul for no good reason. It seems that after the accident, Missy went home with no more than a few broken bones. I’m assuming that because Sister Jude went right into her new life as a nun she didn’t follow up on the accident; clearly she didn’t even bother to read the obituaries or send flowers to the family for their loss. With that weight lifted, Jude is still saddled with indirectly causing Goodman’s death.

Sister Eunice has framed Sister Jude for the murder, but this little plan only works if Goodman was investigating a crime that we now know Jude never committed. If Sister Eunice did this just to get Jude to commit suicide then she failed twice. Also, if the thing that’s possessing Sister Eunice is satanic, why is it so steadfast on destroying Sister Jude? She’s hardly an innocent and she doesn’t even know that Eunice is possessed…so what’s the major reason for getting rid of her?

Poor, poor Lana. Somehow she went from being Thredson’s mommy stand-in to being whatever the heck role he has her playing this week. It’s unclear how/why Thredson went from seeing Lana as “mommy” to “patient” so quickly. This whole thing made me as confused as he is deranged. Now I’m all for Thredson being crazy, but I can’t tell if his lack of consistent insanity is a brilliant storytelling technique, or an unnecessary way for the writers to include rape scenes and other things that further torture Lana and do nothing to move the story forward.

Alas, Lana doesn’t wait around for Thredson to kill her and has a great escape. I cheered, and then I felt foolish for thinking it would ever be that easy with so many episodes left in the season. Instead of running into the night and never having to go back to dark basements and insane asylums again, Lana runs right into the arms of a hardcore he-man woman hater. She really should have been tipped off by his blasé attitude to her getting in the car, but in all the excitement, I can see how she was just happy to be somewhere safe. The driver shoots himself in the head, the car crashes and Lana wakes up at Briarcliff. Poor, poor Lana thought she was safe, but now she’s back in hell and the devil (aka Sister Eunice) will probably have Thredson on the way in the first few scenes of the next episode.

Previously on AHS: Welcome to Briarcliff

The Potter family comes to Briarcliff because they are concerned about their son, Jed. After finding Jed in the barn, covered in the blood of their best cow he’d ripped open and killed, they decide he’s possessed. This theory is further confirmed by the strange language Jed is muttering. Your standard possession symptoms. Dr. Thredson thinks the boy can be cured with medicine and other by-the-book methods, while Father Malachi gets his exorcism on and tries to free Jed from whatever demon or being has a hold on him. Sister Jude is kicked out of the room because of her affliction (aka she’s not a man), but is later brought back in when Malachi fails to get the job done. Nothing seems to work and Jed taunts Sister Jude, reminding her of the “53 dicks” she’s had in her mouth. She snaps, strangles him and it’s not until the boy dies that the ‘possessor’ leaves his body…and seemingly enters Sister Mary.

Lana is given electric shock therapy to erase her memories, but it’s not entirely effective and she is able to keep notes on the things she can still remember. She also recalls the secret tunnel in the basement and decides it’s a means for escaping. She brings Grace in on the plan, but doesn’t give her all the details since she doesn’t want Grace to bring Kit along with them. It’s kind of funny that Lana is so sure Kit is guilty when she’s innocent and still locked away at Briarcliff. A glitch with the exorcism messes up the electricity and all the doors open, giving the three an opportunity to escape. Lana sacrifices her own chance at freedom to make sure Kit stays locked up and yells for the guards when he and Grace try to make a run for it, which was quite the asshole move on her part. Because I’m convinced of Kit’s innocence, it only made me dislike her character. Lana is rewarded for being a traitor by not receiving a whipping from Sister Jude. Instead, she watches as Kit takes the lashes for himself and Grace. Chivalry at its finest.

Dr. Arden is so twisted, and I love it! He turns down Shelley’s advances because she’s a dirty whore in his eyes. This is understandable, given her general attitude of always being down for some sexual action and the time this show is set in. But as we soon learn, Arden’s dislike of whores goes just a little bit deeper than that. He invites a prostitute over for a romantic candlelight dinner, which she ruins by being forward in a way that turns him off. He requests that she put on a nun’s habit, remove her skanky makeup and prepare for whatever he has plans, which I’m assuming is hours of respectable, strictly missionary-style lovemaking. Unfortunately, she sees his BDSM photos, which show women who are bruised, battered, beaten and possibly dead. He catches her, she bites him and flees into the night. Knowing what we know about Arden now, it makes sense now why he’s so nice to naive little Sister Mary.

Last week’s red lingerie was just a taste of what Sister Jude has going on beneath the surface. It seems that before she gave her mind, body and soul to the Lord, she was singing in nightclubs and giving it up to any soldier that would look her way. Also, she once pulled a DUI and hit a little girl, Missy Stone. We don’t know if she was tried for that crime and we can’t be sure if that was the event that sent her life in a more chaste direction, but it should be fun to see the rest of her secrets unravel. It’s hard figuring out who the “bad guy” is in all of this, and the more we learn about Sister Jude, the more I’m thinking it’s not her. I believe she’s the way she is to somehow fix all the mistakes she feels she made before and not because she’s the real Bloody Face.