Contagion has a little bit of everything. A deadly airborne virus that threatens the health and sanity of everyone in the world.  Solid casting (Jude Law, Sanaa Lathan, Matt Damon, Laurence Fishburne and Demetri Martin to name just a few). The type of tragic love story that plays out best in an ‘end of the world’ scenario. Widespread panic. And at the helm director Steven Soderbergh, the man who lent his talents to such film as sex, lies, and videotape, Traffic and Ocean’s Eleven. 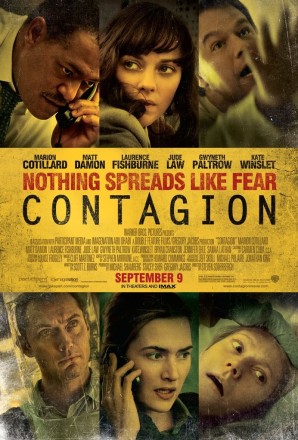 Whether using plagues, viruses, zombie outbreaks or alien invasions, I like seeing somebody else’s vision of how the rest of the world would react if all hell broke loose. I don’t need this film to make me think (ala Inception), I’m just looking for 105 stirring minutes of watching a society unravel under the crippling weight of a global pandemic. Simple request.

Based on first few moments of the trailer, germaphobes might panic a little once the credits have finished rolling. So if you carry around hand sanitizer and walk around with the perpetual fear that you’re going to catch a cold from the guy across from you on the train….you’ve been warned.

When siblings rivalries + “daddy issues” become overwhelming I see no better way to clear the air than with a good ol’ brawl. Warrior focuses on the lives of brothers Tommy (Tom Hardy) and Brendan (Joel Edgerton) leading up to a MMA tournament. Tommy is an ex-Marine with a huge chip – and larger muscles – on his shoulders because he felt he had been abandoned by his older brother. Under the tutelage of their father, Paddy (Nick Nolte), Tommy decides to enter the tournament.  Brendan, a former MMA fighter, quit the sport to become a school teacher but when he couldn’t support his family financially he decides to join the event.

I personally thought this movie was a Fighter remake initially but my ignorance was soon erased. The story may be similar and the feature is about a combat sport but that doesn’t mean the content is mirrored. Not to mention it’s almost a scientific fact that Tom Hardy can do no wrong on-screen. I’m also excited that some moviegoers are going to have their
eyes opened to a rapidly booming sport in MMA.

The only thing I gripe about is the fact that from the very first trailer we all knew that the brothers will be fighting each other in the final. I know most people would make that assumption anyhow but leave just a little mystery for suspense sake.

MMA’s juggernaut promotion, UFC, has just signed a new multi-year deal with Fox network and cable counterpart FX. UFC President Dana White had been uncharacteristically quiet about the potential dealings with other networks since the company’s contract with Spike ends this year.

Check here for all the sweet deets.