It seems as though Nucky has a trick up his sleeve in the episodes to come. He publicly made Atlantic City, and it’s players, aware that he is steeping down as Treasurer but that doesn’t seem to be the end game to his plan. I like that Nucky is showing that running Atlantic City isn’t about having the most muscle but knowing when to pick one’s battles. I’m not sure what he has planned with the assistance of Rothstein and Torio – or the upcoming trip to Belfast – but I’m positive it’s more than just retirement.

Jimmy is beginning to feel the pressure of being a power player in Atlantic City. He has Horvitz on his back about the money he owes him. Eli is doubting that he knows what is about to happen with Nucky. And Angela, unbeknowst to Jimmy, may be having another lesbian episode. I never thought Jimmy had the experience to be successful as the “leader” of Atlantic City and even after this episode’s proceedings I feel the same way. Jimmy is just getting himself into a situation that he is not ready for, no matter who he has by his side.

Agent Van Alden has been keeping Lucy (Paz de la Huerta) inside their apartment under a fake name to keep her pregnancy from the public. Lately she has been getting fed up with being inside all the time and tells Van Alden that “this is a jail” even though she agreed to the arrangement before. Since she was in a relationship with Nucky she is use to being in the spotlight and greatly involved with social atmosphere of the boardwalk. Van Alden tells her that Nucky got her involved in too much trouble but she responds by telling him that “at least Nucky was fun”.

Eddie Cantor, a popular performer on the boardwalk, comes to visit Lucy. She is sad because she feels like she is missing out on so much because of her pregnancy and the arrangement she has with Van Alden, but she never mentions his real name. Eddie tells her that pregnancy is much more important than being a social butterfly…then he gives Lucy alcohol and cigarettes…I don’t think sends the right signal though. Eddie tells her about a play that is coming to Atlantic City and leaves a script for her. Lucy is reading from the script when Van Alden comes home he takes the script away and puts Lucy in her room as she cries. She says she needs to do something or else she is going to go crazy.

Van Alden is getting addresses to speakeasies from Doyle. At the end of their dealings Van Alden asks Doyle if he thinks Nucky Thompson is “fun”. Lucy is on the back stairs of the apartment preparing herself to fall down, with the intent of ending her pregnancy the old-fashioned way, when a delivery comes for her. The delivery was a record player that Van Alden ordered. When Van Alden comes home Lucy is dancing in the living to the music from the record player. He cracks the smallest creepy smile.

Since Nucky’s political and financial standing is under siege Margaret is trying to be more proactive with him. She tells Nucky that she can help him. She has a maid return some luxuries of hers in order to help save money during their troubling times but Nucky says that at a time like this he doesn’t want others to think anything is wrong.

Margaret gets some mail that shows that her family from Ireland is now in America. She hides it when Nucky comes to bed but he knows that something is making her uneasy. He convinces Margaret to tell him what’s bothering her. She is apprehensive about trying to rekindle a relationship because she didn’t leave Ireland on the best of terms with her family. She gets her maid Katie to call the number that is on the mail and asks for “Peggy Rowan”. After checking with someone at the boarding house she is told Peggy Rowan has been dead for 12 years. Margaret leaves and goes to her room to cry.

Later Margaret interrupts her housekeepers as they are in the kitchen drinking and chatting. She asks for a drink and urges the women to do the same. She is trying to relate to them and tells them not to call her “ma’am” anymore when “Margaret” will do. Nucky then comes in and tells Margaret to get ready for dinner. When they come back from dinner, as Margaret is about to get ready for bed, Katie grabs Margaret’s arm and tells her she knows that Margaret is “Peggy Rowan” but she won’t tell her secret. This seems to upset Margaret and she dismisses Katie for the night.

The walls continue to fall in on Nucky. The Commodore is attempting to make deals with Nucky’s liquor supplier in an attempt to cripple his bootlegging operation. This attempt fails but the Commodore orders the Coast Guard to seize his supplier’s boats as they come in with Nucky’s shipment. Al Capone comes from Chicago to inform Nucky “personally” that Chicago won’t be buying alcohol from Atlantic City anymore. Capone says that it isn’t personal and offers Nucky an envelope filled with cash as a token of good faith, Nucky denies the offer.

Owen Slater, who has been bar tending at one of Nucky’s casinos, says that he thinks his abilities are being underutilized. He says that he has the ability to “make people stop…whatever it is you don’t want them to be doing”. That’s the kind of cryptic message that I would want to hear if I was in the pinch that Nucky is in right now. When Richard is trying to close a liquor deal with the manager of Nucky’s casino after his shipment was seized, Slater interrupts and forcibly terminates the deal. Slater tells Richard he has not problem with him personally but they just aren’t buying his liquor. I know I wasn’t sure about this Slater character last week but I think I’m warming up to him now.

Nucky confronts the Commodore and Jimmy at Babette’s during dinner. He can be civil when his former associates are trying to take his livelihood but when you order the last lobster dinner he hulks out. He tells Jimmy that he “will ruin him” and after ruining the Commodore’s lobster dinner he tells him he has “had his last meal” there. 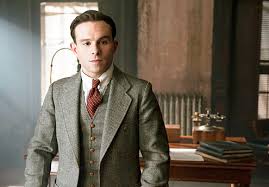