Flawed characters are my favorite kind. The shows that produce fictional people who are fully aware of their crippling personality “quirks”, or at the very least aware of the screwed up-ness of their actions, are usually the ones I can’t miss. Because of this, and the general perfection dished out at Pope and Associates week after week, I’m smitten with Scandal.

You hand me a strong woman who follows an off-course moral compass and has savvy and intelligence that few can compare to, and couple all of that with the type of beauty that words like “gorgeous” and “breathtaking” only do slight justice when describing how truly enchanting she is, and only then do you have Olivia Pope. I’ve read critics take on how this character is an egregious offense to ‘black’, ‘women’ and ‘black women’ alike, and although I can understand the criticism, I can’t even remotely agree. If rooting for a (fictional) married man to run off into the sunset with his (fictional) mistress is wrong, I don’t want to be right. 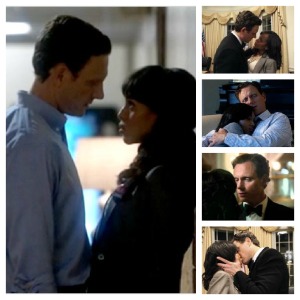 President Fitzgerald Thomas Grant III and Ms. Olivia Pope are a tumultuous love affair for the ages. He’s married and admittedly, she’s the other woman, but the power dynamic that would typically come into play in an affair like this simply doesn’t exist. She, he and everyone around them acknowledge that were it not for her efforts, he wouldn’t be Mr. President. He loves her with such unabashed passion that you forget the typical married man tropes (“My wife doesn’t understand me”/ “I’m just not happy” / “I wish I’d met you first” and the most ridiculous, “I’m leaving my wife”) when you see them together, or even listen to him talk about her when they’re apart. He loves her and all those around him know it, even his wife.

Maybe it’s Kerry Washington’s ability to play vulnerable and emotionally impenetrable at the same time that makes this relationship so much better than half the will they/won’t they couples littered on the TV landscape today. Or perhaps, it’s Tony Goldwyn‘s presidential portrayal that’s half President Bill Mitchell and half hopeless romantic in every single rom-com you could ever think of. It’s that type of strength mixed with vulnerability that makes Fitz an all around good guy. Sure, you know he’s wrong for having an affair, but you consider his wife’s previous indiscretions and you see his undeniable connection with Olivia, and you can’t help but root for them episode after episode.

The best part about Olivia and Fitz? We’ve only seen bits and pieces of how they began, as well as the wreckage of their failed attempts to stay away from each other. If this is even a slight indication of the spark that finally, fully ignites into a full-blown relationship, then we’re in for so much more than a few clandestine meetings and stolen moments they both end up regretting.

Knowing all this almost makes me feel bad for Senator Edison Davis. On paper, and as far as we know, he’s a perfectly suitable compliment for Olivia, but the heart wants what the hearts wants, and all roads seem to lead back to Fitz. I’m not sure how they end up together, but that’s Shonda Rhimes’ job to figure out, I just plan to enjoy watching the journey that takes them there.