Is Tara just an angry newborn vamp or specifically pissed at Sookie and Lafayette?
Tara was generally irate as a human, and baby vamps tend to take some time to find their way, but I think a lot of her anger is coming from being turned against her will. I appreciated that we didn’t have to hear any long-winded speeches about said anger, and instead she bounced around the house and followed Pam’s orders to not kill Sookie and Lafayette. It looks like she’ll have a fresh kill next week and maybe we’ll have some time to enjoy vampire Tara before she becomes a buzzkill again. But can we please hurry up and get some quality Pam/Tara time sooner rather than very late in next week’s episode?

Have the Authority been paying any attention to Bill and Eric’s respective social and/or love lives for the last few months?
Obviously not. Such things are clearly trivial to an organization that predates the biblical history of man. However, if they took a moment to do any research prior to the interrogations (pure silver IVs and UV light as torture techniques, ouch!), they would know that Bill and Eric spend a great deal of time with humans and don’t appear to have any interest in going back to the days before they were “out of the coffin”. It’s been apparent to everyone else for quite awhile that they’re both attached to Sookie, surely something like that is important info to share with Roman and his Chancellors along the way. Or maybe they know all of this and genuinely believe Eric and Bill aren’t traitors, and this is all some ruse to figure out what Nora got herself involved in.

How long can Alicde avoid becoming the new Packmaster?
The ‘Laws of the Pack’ sound like serious business, and whether or not he wants any parts of dropping his lone wolf status, I think Martha will get her way. Something about how she magically had time to change into a werewolf, eat her son and change back into her clothes (seemingly) in a matter of seconds, as well as rightly predict that her granddaughter would turn werewolf makes me think she’s the type to bide her time patiently until Alcide willingly takes on his new role. Either that or she’ll find some way to threaten someone he cares about and force him into doing what she wants, but both versions still end with Alcide leading the pack….eventually.

Is Jason worth 10k?
Apparently spending time with him was good enough to ruin Sharon Singer’s marriage and one could chip a fang on his ass, so it would seem Rev. Newlin’s asking price makes sense. Unfortunately for him, Jessica wasn’t interested in selling her friend and Jason just isn’t interested. He’s much too busy trying to get his friend back, while at the same time soothing his soul and guilty conscience a bit. I think Jessica will be the only one that can offer the kind of salvation Jason is looking for, sorry Hoyt.

Are humans friends or food?
According to the Vampire Bible, the Original Testament, Lilith was God’s first creation. Adam and Eve’s true and only purpose was to provide vampire’s with nourishment. Some vampires agree and find coexisting with humans to be a blasphemous act, while others believe that mainstreaming is the only right way to do things. The Authority doesn’t want to see anything ruin their mainstreaming mission, which makes the one vampire that could, Russell Edington, a huge threat. Russell is still recovering, so he doesn’t look all that formidable at the moment, but once he’s back, it should be enjoyable to watch Bill and Eric try to catch and kill him. Although the idea of Fundamentalists versus the Mainstreamers in the True Blood universe was initially introduced in season 3, back when the Magister wasn’t dead, I still think that right now, the focus of all this will be on Bill and Eric’s bromantic adventures and Russell. If we do learn any concrete details about the Sanguinista Movement this season, I’ll be pleasantly surprised. 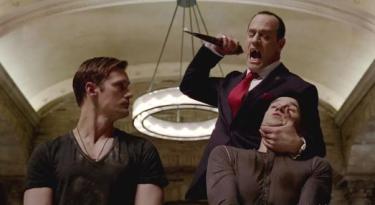 Next week’s True Blood: Whatever I Am, You Made Me (Not sure what’s worse, Jessica’s green streak last week or Hoyt’s eyeliner next week.)