Previously on The Office: Work Bus 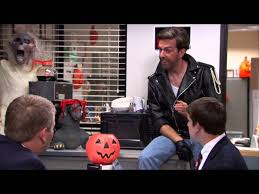 If you hadn’t guessed from the title, this Halloween-themed episode mainly revolved around Andy and his Cornell a capella group “Here Comes Treble.”

I think it was a pretty solid episode, with lots of laughs and the beginnings of a plot arc, however strange and lackluster as they seem.

Comedic icon Stephen Colbert stars as Broccoli Rob, the mentor of Here Comes Treble; the man who has regaled current Treble members with tales Andy’s college escapades. But the catch? Broccoli Rob has Treble convinced that all of Andy’s nicknames, highlights, and quirks are his own. We learn that, to Andy, Treble was and is his life. With this identity taken away from him, he believes that his life has lost its entire meaning. His first solution to the problem? Move back out to Cornell with Erin, a plan Erin is adamantly against. Instead she convinces Andy to donate money instead. Andy calls up his mom for money and finds out that his parents are broke. Here’s hoping that wherever the writers are going with this plot arc, it’s not a depressed Andy searching for existential answers, somewhat similar to Rob Lowe’s horribly depressing–and unnecessary, in my opinion–role as Chris Trager on Parks and Recreation.

Other notable plot and happenings included Pam and Jim arguing because Jim spent $10,000 on his new sports marketing job, twice the amount they agreed upon. Dwight finds out someone in the office is taking depression pills and, with the help of Nelly, tracks down the owner. (Spoilers: It’s Nelly.) Oscar is caught by the cameras making out with Angela’s husband. 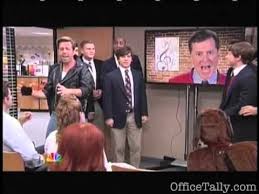 Dwight: [After getting his head stuck in a pumpkin] I mean, the pumpkin should rot off of my head in a month or two. Right?

Creed: [Came to shirt with blood splattered all over himself]  It’s Halloween. That is really, really good timing.

Meredith [Dwight throws a huge net over her head, believing she is the drug user] Stop baggin’ my head!

Clark: Where’s the band? ‘Cause there’s no way you guys are making this magic with just your mouths.
Creed: That’s what she said.

Andy: [When he argues that his trademark song is George Michael’s Faith, not Broccoli Rob’s] Who did you think I was dressed up as?

Treble member: I thought you were [dressed up as] Adam Lambert.

Kevin: [Jim and Pam argue about their money using the song Monster Mash as their analogy] It turns out Pam really, really hates Monster Mash.