Previously on Doctor Who: Dinosaurs on a Spaceship

From dinosaurs to saloons and shoot-outs, Doctor Who zaps from one end of the story-telling spectrum to the other. In a grand mash-up of Skynet terminators, Stephen King-esque gunslingers, and old school spaghetti westerns, the Doctor and company find themselves in a sticky dilemma packed with as many delicious moral intricacies as gaping plot holes. 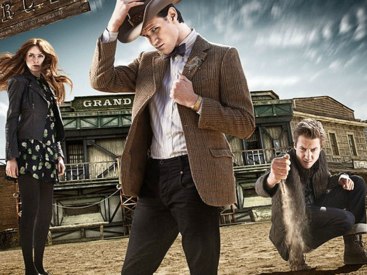 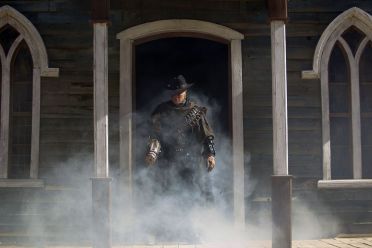 Doctor Who knows its fan base – just look around. Cobbled together from the recycling bin of some of science fiction’s most loved and loathed content, A Town Called Mercy gave nerdy boys and girls plenty to recognize. It’s a space western, after all, a sub-genre responsible for such sci-fi notables as Firefly and Star Wars – as well as lesser gems like Cowboys and Aliens.  It’s nice to get a nod every now and again from the Doctor Who writers. This episode said to me, “Hey, we get you, we know who you are, and like it or not, this one’s for you.”

There are plot holes in this episode, okay? The cyborg gunslinger has no reason to teleport in such an idiotic way. It’s inefficient, and I’m certain cyborg killing school taught him better. Also, what’s up with the stone circles of absolutely zero protection? And does it bother anyone that everyone in Mercy should be dead? Seriously, without Kahler-Jex they all would have succumbed to cholera. I’m not even going to touch the fun if historically disastrous inclusion of anachronistic electricity. But you know what? I’m okay with all these funky elements. The Doctor careens through space and time without a good grasp on consequences, so why should the episodes that document his adventures be any different? Carry on, good Doctor – I see your plot holes and choose to ignore them.

I really can’t express how much I enjoy ranting about morality. I need to stop. It’s actually embarrassing how much I wrote on this subject before realizing none of it needed to be read by anyone anywhere. Instead, I’ll do something different: I’ll talk about what I liked. I liked how the Doctor acknowledged that his mercy ultimately seems to lead to more condemned lives than saved ones. I appreciated Amy’s insistence that the Doctor’s a danger to himself and the whole universe when not accompanied by a stabling presence (i.e. a human companion). I’ll just say one negative thing: I don’t think the writers allocated enough time or philosophical depth to this subject. I want 43 whole minutes of morality talk – we can skip the monsters and time travel for just one episode, right? I’m sure loads of people would be on board with this idea. We could just sit the Doctor down and let him talk about ethics — like a lecture! (It may be correct to say that I’m having college withdrawals.) 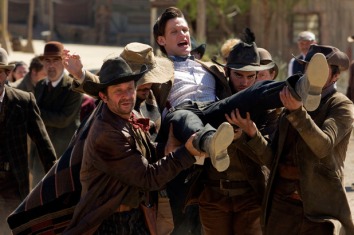 The Doctor: Anachronistic electricity, keep out signs, aggressive stares –has someone been peeking at my Christmas list?

Kahler-Jex: Looking at you, Doctor, is like looking into a mirror . . . almost. Well, there’s rage there, like me, guilt, like me, solitude — everything but the nerve to do what needs to be done.

The Doctor: Today, I honor victims first — his, the Master’s, the Daleks’ — all the people who died because of my mercy.

Kahler-Jex: We all carry our prisons with us. Mine is my past. Yours is your morality.