thoughts on true blood season finale: save yourself 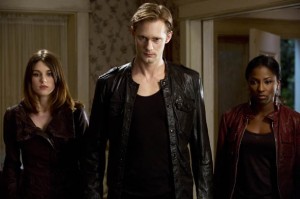 I was almost a week late watching the fifth season finale of True Blood, which is forever in internet years and required a certain level of stealth to avoid any spoilers. My only slip-up was seeing the headline that went something like ‘True Blood Shocker: Did Bill Die?!’ Of course, I wasn’t too worried that Bill had in fact died, but I spent the next day or so wondering just what occurred to bring up the question, and this morning, I got my answer: Bill died, in some form or fashion, but it doesn’t make him any deader than he was going into the episode (more on that below).

This was Alan Ball’s last season and although he went out with a bang and left a lot of fun stuff to explore in season six, I can’t say the finale left me satisfied. Maybe my opinion will change after I’ve re-watched the season in its entirety, but as it stands, I would give the finale a solid 8.5 as a standalone episode and 7 as a wrap-up for the entire season. Here’s why (in order of overall importance):

Bill only sort of died. This season, Bill went from running from the Authority to attempting to run the Authority. For awhile, it was up in the air whether or not he was really into the Sanguinista Movement (boy did that name came and go with very little mention after Roman’s death) or simply playing the part to get as much info as possible. As it turns out, Bill is a hardcore Lilith believer, so intense in fact that he drank all of “her blood” (still not sold on that one), exploded in a similar fashion to the true death and rose out of the blood just like Lilith herself. For a moment there, I thought Bill was dead and during that brief second or so, I imagined all the possibilities that could come with Bill out of the way for good. This is not to say that I dislike Bill, I just find him completely boring in comparison to stronger characters (although he did become quite appealing when he tricked and killed Salome), like Eric or even season one Bill. I’ll reserve any judgement on how much I like “Bilith” until after we see how much of the psycho goddess actually got inside him or if we’re just stuck with a much more powerful, yet still completely dull Bill.

Warlow was barely mentioned. I’m sure introducing Warlow in this season had a point. I’m positive writers plan to divulge who Warlow is and his intentions with Sookie sometime next season. However, I’m not sure if Warlow will be another letdown or not. They killed off Russell with very little fanfare, which in itself bothered me, but if we learn next summer that Russell was Warlow and Eric saved Sookie’s life by killing him, I’ll be less than pleased. I still see this mysterious Warlow as a Rumpelstikin type of guy and want to believe he’s someone new and exciting that will shift the focus back to Sookie. Again, if it turns out Warlow was Russell, I will strongly consider, but in the end decide against, cancelling my subscription to HBO.

Andy is a daddy, several times over. Maurella may have made birth look magical and painless, but the moment was nothing without Lafayette’s colorful commentary. I was pleased she made it clear she has no intentions to stick around, because I really do like the new and improved Andy, as well as his budding relationship with Holly. I think watching him play single daddy to newborns will provide a little comedy here and there, and perhaps the writers will remember Arlene has two kids that aren’t named Mikey and let them return for babysitting duties. Also, does this somehow mean Andy and Sookie are related now?

Jason and his hallucinations. Maybe it’s just me, but Jason’s hate for vampires seems very reminiscent of his storyline in season two when he also developed a hatred for vampires. This time things are a little different, since he has his dead parents egging him on and he has a vampire in love with him, but it still all plays very familiar. Outside of killing Sookie, there’s not much worse vampires can do to hurt him, so I don’t see how much farther they can go with all of this. However, of all the events that transpired, I somehow think Jason’s plot will have the most relevance next season, assuming they move forward with a vamps vs. the world sort of thing next season.

Pam and Tara kissed. I have waited for this moment since the start of the season, but it wasn’t until just after that I realized I don’t actually want the two to end up together. I did appreciate that it wasn’t a “we’re two lusty vampires who like to drink blood and claw at each other” scene but instead a romantic moment that Tara had more than earned this season. I’ve also enjoyed seeing the softer side of Pam, and fans of the book version of Pam have seen her successfully carry on a relationship without losing any of her edge. However, I don’t think either of these lady vamps would do well in a relationship. Pam is Pam and Tara, whether vampire or not, is perpetually screwed up. I’d mention the fact that they’re mother and daughter, but that’s obviously irrelevant (I can’t express enough how NSFW that link is!) and would only serve to strengthen their romantic bond should the writers decide to go there.

Alcide FINALLY become packmaster. Alcide’s daddy finally served a purpose and gave his son the juiced up V he needed to kill J.D. We don’t know where he got that blood from or how he was so sure it was the superior product, but I’m hoping those are the questions Alcide thinks to ask when he comes down from his high. Similar to much in the TB universe, it’s safe to say yet another storyline is being dropped without any discussion and going in a new direction, and by that I mean Sookie and Alcide are kaput and Alcide and Rikkie are probably a go for hot, animalistic werewolf sex next season.

Luna FINALLY rescued Emma. It never seemed like they were going to kill off the cutest wolf pup in the world, so I was wondering why they kept Luna and Sam on the hunt and why I should even care. It turns out, being held up at the Authority still served multiple purposes: killing off Rosalyn, rescuing Emma, exposing to the world that vampires were behind all the bombings at all the Tru Blood factories and most importantly, exposing shifters to the world. I don’t see how any supe will be able to spin this in their group’s favorite, most of all, the vampires. Hopefully, this small detail will have major ramifications for next season and take the episodes beyond dark rooms in one stupid building.

Minor note(s): This was the first finale in the history of the show that didn’t injure or kill any characters that I care about (RIP J.D., Salome and Rosalyn). Russell deserved a better death than the one he was given or at the very least, he should have done a lot more bad in the time he was free, I would have been fine with either option. 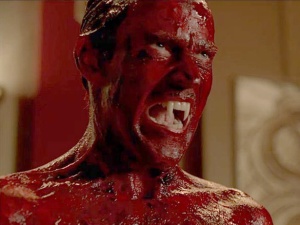 We have another long wait ahead of us to find out how new showrunner Mark Hudis plans to address these plots, along with which characters/stories were brought up only to be dropped by the time the six season comes around. Until next summer, enjoy this look into the season finale from Ball’s perspective: