the vampire diaries recapping: the end of the affair

Stefan was devilishly handsome - and just plain demonic - back in the Roaring Twenties.

In an episode full of glamorous flashbacks, The Vampire Diaries explored dysfunctional family dynamics as Caroline literally got some tough love from her father and we met Klaus’s twisted sister Rebecca. In the wake of his failed attempt to create a community of hybrids in Tennessee, Klaus takes Stefan to their old haunts from the Roaring Twenties – Chicago – to get answers about why the curse wasn’t broken from a powerful witch named Gloria. Little does Stefan know that he’s going to find out a lot more about his past – and his relationship with Klaus – then he bargained for. Chicago was the site of some seriously bad vampire action for Stefan during his Ripper days. He was a dapper demon who enjoyed making his victims suffer and memorialized his victims by keeping a list of their names in a wine closet he kept in his apartment. Worse still, he and Klaus were friends back then! Also delving into Stefan’s colorful past are Damon and Elena, who are tipped off about Stefan’s location by Katherine. Klaus’s witch friend tells him she needs to speak with his sister Rebecca in order to make contact with the Original witch who could reveal why the hybrid transformations aren’t working. Are you still with me? This hybrid curse mythology is getting more and more convoluted. The problem is that Rebecca is dead. Klaus, who went by the name Nick in the Twenties, staked her after she had fallen for Stefan and chose him over remaining with her brother. Klaus finds Rebecca’s coffin and removes the stake, leaving a compelled guard to serve as her first meal upon her resurrection. Arriving in The Windy City, Damon and Elena check out Stefan’s old pad and Elena is spooked by the alarmingly long list of Stefan’s victims. Like Damon said, Stefan’s not in town to visit Oprah! While Damon drops in on Gloria at her bar, Klaus takes Stefan on a trip down memory lane by stopping by his apartment and nearly catches Elena hiding in the wine closet. Luckily, Stefan is the one to peek in and covers up for her. The Stefan she knows and loves is still there… for now, anyway. Outside Gloria’s bar, Stefan reads Damon the riot act about bringing Elena to Chicago and demands he get her out of town. Elena, however, tries to convince him to return to Mystic Falls with her. Not only does Stefan refuse, but he catches her trying to drug him with a tranquilizer. He’s over her, he lies. Elena is finally starting to believe him.

Will Gloria uncover the fact that Elena is still alive?

Inside, Damon distracts Klaus to give Elena time to rescue Stefan, but the ornery hybrid tires of their witty banter and tries to stake him but Gloria intervenes. She won’t have blood spilled in her establishment, she commands. I like that gal! Back in Mystic Falls, Caroline is having a very bad day. Her dad is hell-bent on curing her vampirism by giving her aversion therapy. He triggers her hunger by showing her blood bags then, after removing her protection ring, repeatedly exposes her to searing sunlight as she screams in agony. Luckily, Tyler enlists Sheriff Forbes’ help in finding Caroline and they rescue her from her deluded dad. Safe at home, Caroline breaks down while Tyler comforts her in his arms. When Rebecca finally wakes from the dead, she’s understandably peeved at her bro for staking her but she’s even more freaked out that a special necklace she needs to contact the Original witch is missing! Is there no single piece of jewelry on this show that doesn’t have a mystical purpose? Maybe Tiffany needs to get in on this vampire legend stuff. Elena, who has a growing collection of magical bling, is now in possession of the necklace, which of course gives Klaus and his growing band of merry monsters even more reason to be hot on her trail. Sure to complicate matters further is our favorite evil twin, Katherine, who is also in Chicago (big shock) and happened to be at the Cotton Club-style establishment that Klaus and Stefan frequented the night it was raided by the cops  in the Twenties. The cops were shooting wooden bullets, revealing that somebody was hunting vamp siblings Klaus and Rebecca.  Kat looked super cute in a flapper wig like the one Catherine Zeta-Jones wore in the musical Chicago. It’s a great look for Nina Dobrev. What’s Kat up to this time? Is she still chasing after Stefan? With Rebecca back in action, she’ll have to get in line.

the vampire diaries recapping: the hybrid

[Editor’s note: Starting this week, we’ll be featuring Vampire Diaries recaps by TVTeaser from Night Bites. Make sure to check out last week’s season three premiere episode The Birthday recap and all of his other Vampire Diaries tidbits and info –Nicole] 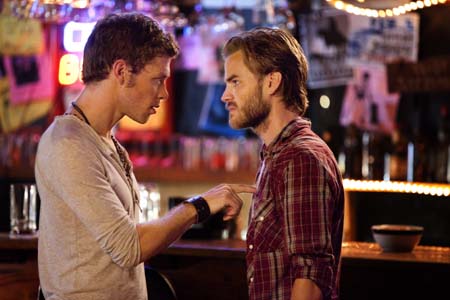 Ray and his pack mates were doomed to fail the hybrid transformation process because Elena is still alive.

September 22 – A full moon is set to descend on Mystic Falls and you know what that means. Things are gonna get mighty hairy for our Vampire Diaries favorites. After a bitter Damon gives up on Stefan for killing Andie, Elena turns to Alaric for help in going after Stefan. She gets a lead from Tyleron locations in Tennessee where werewolves would find sanctuary then heads off to the Smokey Mountains with Ric. Preparing for their dangerous mission, Ric gives Elena some wolf’s bane and she hands him her protection ring. What Elena doesn’t know is that Alaric had clued Damon in on their plans and he shows up to keep her out of trouble. Seemingly annoyed by his interference, Elena is begrudgingly comforted by his presence. But is a forest teeming with bloodthirsty werewolves the best place for Damon to be?  Klaus and Stefan discover the camp site of Ray’s pack and commence the process of transforming them into hybrids, using the human boyfriend of one of the she-wolves as a blood bank for the famished were-vamps when they come to. Unfortunately, the process doesn’t work out as planned and a convulsing Ray, bleeding out of his eyes, goes rabid, biting Stefan as he escapes. Klaus tells Stefan he won’t save him with his hybrid blood until he brings Ray back. Damon, Elena and Ric encounter Ray first, however, and subdue him. After tying him up in chains they attempt to interrogate him but he begins to transform into a wolf before the full moon even appears! A feral Ray later gets into a scrap with Damon, and Stefan arrives in the nick of time to save his brother by ripping Ray’s heart out. Stefan asks Damon to return Elena to safety. Elena, meanwhile, convinces Alaric that they should be there for each other now that they’ve both lost so much. Alaric agrees to move back in, and he wisely decides to keep the protection ring. Stefan returns to the camp site to find Klaus surrounded by dead hybrids. They had all gone rabid or bled out and Klaus can’t understand how the transformations failed after he had completed every step of breaking the curse that prevented hybrids from walking the Earth.  A look of realization flashes across Klaus’s face. Has he figured out that Elena – the doppelganger who needed to die to break the curse – isn’t six feet under? Stefan distracts him, for now, anyway, by convincing him to heal his werewolf bite. Stefan is, after all, his only companion left, Klaus says morbidly. Back in Mystic Falls, Tyler and Jeremy are in for some shocking discoveries. Waking up to find Caroline gone after their steamy night together,Tyler has some awful-tasting coffee while chatting with his mom about his tryst with Caroline. When Tyler leaves, Mrs. Lockwood summons a man named Bill (played by Jack Coleman of “Heroes” fame) to take care of her vampire problem. Tyler tastes some vervane at The Grill and Matt clues him in about the substance’s use for outing vampires. Tyler realizes his mom was testing him and confronts her. She admits she knows that Caroline is a vamp and forbids him to see her because she’s a monster. Tyler decides to show his prejudiced mother that the Lockwoods have a “monster” of their own in the family and chains himself up while she watches his werewolf transformation from the safety of a locked cell. In the morning, an enlightened Mrs. Lockwood promises to make things right with Caroline but finds that “Bill” isn’t keen on releasing Caroline just because she had a change of heart. When Caroline comes to, she’s shocked to learn that her jailer is her own father. Awkward! Jeremy convinces Matt to help him bridge the gateway between the living and the dead by gathering some of Vicky’s possessions to tap into her vibe. Although hesitant at first, Matt agrees to help and Jeremy gets another visit from his (first) dead girlfriend, whom I must say is looking gorgeous. Death certainly becomes her. Vicky’s ghost tells Jeremy that she is able to return from the dead, then abruptly disappears. Appearing in her place is Anna (dead girlfriend #2), who warns Jeremy not to trust Vicky. The plot thickens! When Damon, Elena and Alaric return home, Damon forces Elena to admit she bid a hasty retreat from the woods in Tennessee out of fear for the werewolf threat to Damon’s life. Taking Elena’s face in his hands, Damon vows to make her remember her feelings for him after they succeed in rescuing Stefan. Looks like Miss Elena has a choice to make in the near future.  Do you think Damon is making progress in his quest to win her over?

Anyone who knows me – this includes you now – knows that I have a soft spot for the undead. Zombies more specifically. I know that in a previous post I didn’t list MTV’s new show Death Valley as a show that I was excited for come Fall but for some strange reason (sometimes I like to keep secrets or whatever) it skipped my mind.

The cast doesn’t feature any solidified “stars” but the most well-known might be journeyman Bryan Callen who has had roles on MADtv, Oz, and Sex in the City just to name a few. The cast isn’t what I’m worried about right out of the gate though. The comedic current is more concern, but from what I’ve seen so far I’m confident that I’ll be changing my diaper on the frequent. I felt the same way with Reno 911 when it first aired; I really didn’t “know” any of the cast but they made me forget about that with their banter and hilarious “investigation” processes.

The whole “Cops and Robbers” thing is far from a new genre but throw in a pinch of unnecessary supernatural gore  and that’s a recipe even grandma will be proud of…but she shouldn’t watch the show…unless she’s awesome of course.