This season is bittersweet for a myriad of reasons. Not only is it the last season, but there are a limited amount of episodes left: only 10! The other reason I am a little bit sad is because I do not know how this season– and the series — will end! I’m not talking about specifics here. I’m talking about the fact that I need the ending to be strong. Need. This is slightly horrible, but I almost wish that the season three was Fringe’s last season. That was a mindblowing season– and the season finale would have– and did — drive me crazy. I desperately need a deliciously amazing season finale. Need!

Onto the recap: And this who “toning down the fangirl thing isn’t working that well… but in my defense, I can only fangirl for 10 more episodes. Then I literally do not know what I will be doing with my time. This is one of my biggest worries in life right now. (As you can see, right now my life is pretty lackluster.)

Team Etta (as I have begun to call this new Fringe team): Etta seems to embody traits of both Peter and Olivia, which is kind of cool. Etta has suddenly become the protagonist, leaving all my “classic” favorite people in the back– the way, way back. The episode begins with Olivia suggesting that Walter might have written down notes on how to defeat the Observers. This means they must go back to their old haunting grounds– Walter’s lab. Which is, of course, right in the middle of one of the Observer’s HQ.

Upon their arrival they realize that  Walter ambered most of his lab. Visible through the amber is a video recorder; Walter must have been recording his notes! To get the recorder out, they must use a laser. That means they need electricity. Before they can decide the specifics on trying to turn on the lights, a human Loyalist guard comes in. Etta tortures him for information, using Observer tech that literally takes years of your life away, horrifying the Original Fringe team.

Gael, the Loyalist, was played by Eric Lange, a man known for his Sci-Fi acting chops in shows like Firefly, Chuck, and Angel. Between being tortured by Etta, Olivia comes in and uses her sad, sad eyes (and words) to get Gael to help them out. Etta and Peter dress up as Loyalists– and Etta and Olivia have a very awkward interchange which sounds like Etta really is the new protagonist. “I know you like to be in control. So do I.”

Etta and Peter see Simon’s decapitated, blinking head on their way to the electricity room. Peter has to physically restrain Etta from going on a shooting rampage. They get the electricity on and successfully retrieve Walter’s recording. Olivia convinces Gael to turn his life around– with the help of her sad, sad words and eyes. In the end Etta wants to kill Gael, but ultimately decides to let him go free. Both Gael and Etta admit they want to be nicer because of the pity they see in Olivia’s eyes (You thought I was pushing the “Sad-eyed Olivia” thing too far? Joke’s on you!  My analogy was actually quite literal). Walter’s video shows that there are a series of clues they need to follow and figure out to solve the encrypted code to himself. 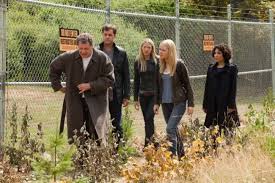 Thoughts, Problems, and Other Things: 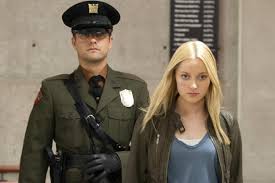 Gael: Where did you get that?

Etta : It’s not important. What’s important is that I have it.

Walter: [regarding Pigeons] Flying vermin. You’d think after twenty-one years the Observers would have found a way to get rid of them first. Or at least found a use for them. Maybe freeze-dry them and hand them out to The Poor as sustenance.

Peter:  Etta? Etta, no, no, stop, stop. What are you doing? We have to keep on moving. Think of the tape. Think about what’s on it. Think about your future. There will be a time for vengeance and a time for grieving, but it is not now. Stop. Stop. They’ll pay for what they’ve done. I promise.

Gael: I’m gonna fight. For the Resistance. I want you to know that.

Etta: You don’t have to lie anymore. I already let you go.

Gael: Well, that’s why this time I’m hoping you believe me. I mean, this can come in useful. There aren’t many Resistance Fighters with an active Tat I.D. You said ‘I saw something in her eyes’. You were right. There was a certainty that I’ve never seen before, and I don’t know how to explain it other than to say I felt… for the first time… that we were supposed to win. Why are you letting me live?

Etta: Something that I saw in her eyes as well. Pity.

Gael: Pity for who?

Etta: For all of us.

3 thoughts on “fringe recapping: in absentia”